BELGRADE – Serbian Orthodox Church (SPC) Patriarch Irinej said on Monday, commenting on the 10th anniversary of the pogrom against the Kosovo Serbs, that the suffering of the Kosovo Serbs was still ongoing. 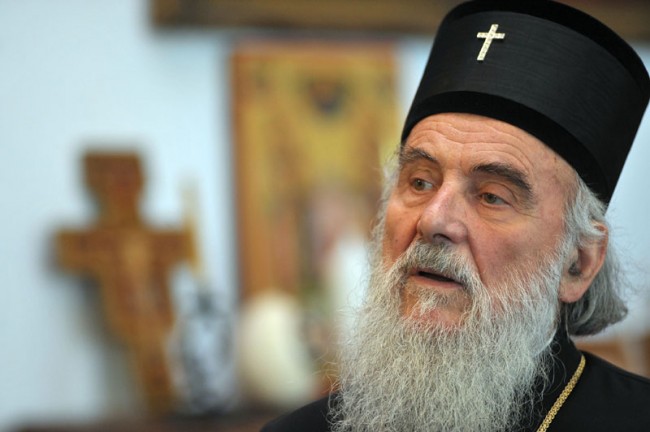 The suffering in Kosovo comes at a time when we pride on democracy and freedom, he said at a forum held at the National Theatre in Belgrade, adding that the pogrom happened in view of Europe and the US.

Such suffering that happened in the late 20th and early 21st century was not recorded even at the time of the Ottoman conquest of Kosovo, he stated.

The imperial Prizren and other cities were hit during the pogrom of 2004, leaving them empty of Serbs, he stressed.

“Between 1999 and 2004, 135 churches and monasteries were burned, destroyed and devastated, with most being protected cultural and historical monuments,” Irinej said, pointing out the Bogorodica Ljeviska Church in Prizren, which was built in the 14th century, and the Seminary in Prizren.

“Serbian holy land Kosovo is without Serbs. It all happened in the presence of those who were supposed to bring peace and some king of well-being to all the people in Kosovo,” he said.

Serb cemeteries have been destroyed, while Albanian cemeteries in Serb areas remain intact, the remarked.

Serbia’s Minister without Portfolio in Charge of Kosovo Aleksandar Vulin calle don the international community to follow its own decisions.

“We want them to keep in mind with every agreement that crimes have not been punished and that we will always keep asking when they will be, that we want the names not only of the arsonists, but also of those who gave them the orders,” Vulin stressed.

“Those who have learned to take down crosses, burn churches and houses and not answer for it will never stop their crimes,” he underscored.

He added that he was supposed to be at the rebuilt Church of St Nicholas in Pristina on Monday, but that he had been denied access.