Source: Antiochian Orthodox Christian Archdiocese of North America,
Natalya Mihailova | 16 December 2014
On Sunday, December 14, 2014, the final day of his visit to the United States before flying home from Washington, D.C.'s Dulles Airport, His Beatitude Patriarch John X of Antioch and All the East, alongside His Eminence Metropolitan Joseph, presided over a Patriarchal Divine Liturgy at Ss. Peter & Paul Antiochian Orthodox Church in Potomac, MD. 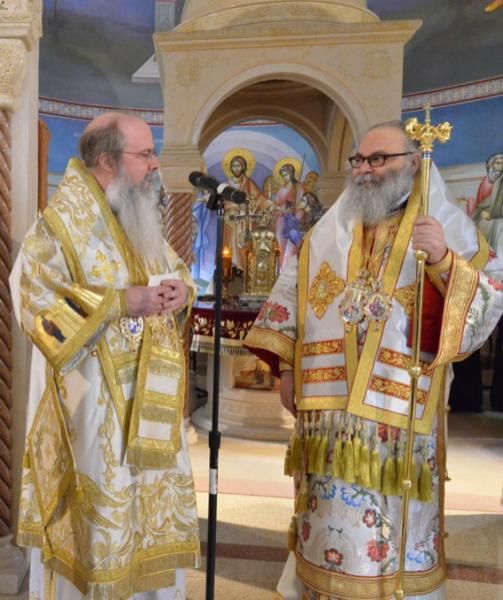 View a full photo gallery here, courtesy of the Orthodox Church in America.

“The Church in North America is well aware of the trials and tribulations that have afflicted the faithful of Syria and the Middle East and it is good, not only when brothers dwell together in unity, but when they pray together and bear one another’s burdens,” said Metropolitan Tikhon at the conclusion of Sunday’s Divine Liturgy.

“The faithful of the Orthodox Church in America have been praying for Your Beatitude, for your brother, Metropolitan Paul, and Mar Gregorios Youhanna, who are held in captivity, and for all peoples within the territory of the ancient and venerable Patriarchate of Antioch.” Metropolitan Tikhon also presented Patriarch John X with an icon of St. Nicholas, and presented an icon of St. Sergius of Radonezh (patron of the OCA Chancery’s chapel), to Metropolitan Joseph.

Most viewed articles
Hallowed Be Your Name: Some Grammar and A Reflection205
Who Is the Author of Confusion and Fear?171
Church Dating 1,600 Years Back Discovered in Turkey’s Priene Ancient City155
How to Read the Bible95
Seven-day celebrations dedicated to the Saint who helped Bucharest during plague epidemic begin on Thursday78
Holy Intercession Church in Glen Cove, NY, Celebrates its 70th Anniversary67
Patriarch Kirill Encourages the Media to Report Proper and Adequate Information about the Church56
Since the Start of the Pandemic Moscow Priests Have Made Over 4,000 Visits to Patients with COVID-1939
Words from St. Isaac of Syria1
Most popular authors
Archpriest Michael Gillis205
Fr. Stephen Powley171
Pravmir.com team162
Dilan Pamuk155
Archpriest Lawrence Farley95
Aurelian Iftimiu78
Archpriest Stephen Freeman1