Source: Notes on Arab Orthodoxy
Natalya Mihailova | 25 December 2016
His Beatitude Patriarch John X arrived in Aleppo on Saturday, December 24, 2016 to celebrate Christmas with the children of this steadfast diocese, who are wounded by the absence of their shepherd, His Eminence Metropolitan Paul. 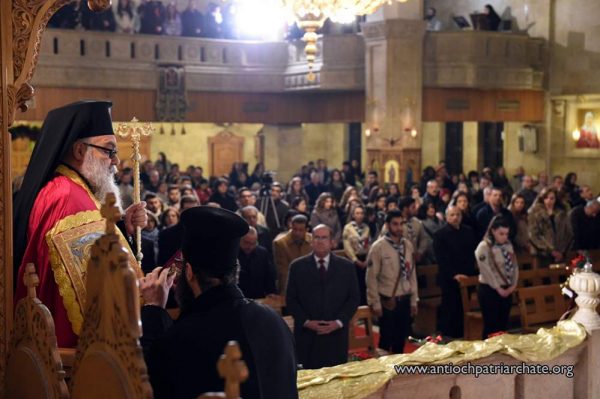 His Beatitude entered the church in a solemn procession to the beat of a brass band that played and to the great joy of the faithful. He served matins and the divine liturgy at the Cathedral of the Prophet Elias in Aleppo, assisted by Bishop Nicholas Baalbaki; Archimandrite Mousa al-Khasi, Metropolitan Paul’s vicar; Archimandrite Alexei Shehadeh, director of the Patriarchate’s Department of Ecumenical Relations and Development; and many priests and deacons from the diocese.

Archimandrite Mousa welcomed His Beatitude with the following speech:

The nativity of Christ is the inauguration of a new stage in the life of the human race. God created man to live with Him in intimacy and in communion of love. Man chose to separate from God and to fall into sin, but God’s love did not leave him to his inevitable fate. Christ became incarnate in order to bring back this intimacy and to inaugurate a new stage of human life, the stage of the human race’s rebirth and resurrection. On this year’s Feast of the Nativity we experience this sense of rebirth and resurrection.

Today, our city shakes off the dust of harsh circumstances from her shoulders as she inaugurates a new stage, a stage of rebirth, a stage of healing and building. Today, the Diocese of Aleppo and Alexandretta begins in Aleppo the path of healing from her wounds, despite the open wound that remains in her heart, the absence of her shepherd. But this Diocese of Job has learned that the pain of wounds does not mean that she must surrender to them, but is rather a constant reminder to continue along the path of healing.

Our children of this diocese have suffered daily in Aleppo, Idlib and Tabaka from their lack of physical safety and they still suffer the impact of difficult living circumstances, as well as displacement and alienation with all the suffering and hardship that they bring, along with their brothers in Alexandretta, Mersin, Arsuz, and every corner of the world. The question today, with the start of this new stage in the life of Aleppo, is: has the time come for us to rest? Yes, Your Beatitude, the time for rest has come, but we have learned that rest is not in momentary relaxation, but the soul’s rest is in striving to seek the resurrection with its redeemer. Therefor, we the children of this diocese make a pledge before you today, Your Beatitude, before our absent-yet-present shepherd, and before the entire Church, from this place, from the Church of Saint Elias in Aleppo, which has not abandoned her children and whose children have never abandoned her, despite the dangers and frightful hardships: we shall not rest except in resurrection. We shall not rest except in rebirth. We shall not rest except in healing. We promise you that the blessing of your presence among us will be the inauguration of the rest of this healing.

When Aleppo was passing through the greatest dangers and the darkest circumstances, two great men entered, challenging all these dangers and circumstances: her pastor, Metropolitan Paul, who refused to not celebrate the Resurrection with his children, so he was kidnapped as he was on his way to them, but his way continues on the path into their hearts, since day after day he is more present in their hearts, their prayers and their hopes; and her patriarch, John X, who, by being present in 2014 to celebrate Christmas with his children in Aleppo, epitomized all courage, daring and sacrificial love. Today, on Christmas 2016, you have come, Your Beatitude, to inaugurate for us by your presence among us this new stage, the stage of striving and hope– striving for work and building and hope that your blessed presence among us will be an earnest of a presence that will bring our shepherd together with his children always, to celebrate Christ’s resurrection and theirs.

I hope that you will permit me to offer you in all humility, in the name of the diocese of Job, her shepherd, priests, parish councils, and faithful, this mosaic icon made by Aleppan hands lifted up for the glory of your patron, Saint John the Theologian as he stands before the cross of our Lord, in the hope that just as John the Beloved once rested on the breast of his Beloved at the Mystical Supper and prayed with Him on the cross, that you will bear us in your holy prayers whenever you celebrate the Church’s mystical supper at the divine liturgy and you pray before the cross of our Lord Jesus.

In his sermon, His Beatitude spoke explaining the significance of the feast and Christ’s incarnation for the salvation of humankind. He wished that this feast will bring peace to Aleppo, in union with the soil of the entire Syrian nation. He stressed the resolve of the people of Aleppo, their steadfastness and their dedication to their land and their nation, and his hope that we will celebrate it in the presence of Metropolitan Paul very soon.

The service of prayers for the feast was attended by the governor of Aleppo, the president of the city council, and a delegation of officials. The divine liturgy was followed by a festival in the churchyard, after which His Beatitude went to the church hall where a cake was cut and the faithful who had come to receive His Beatitude’s blessing and to congratulate him on the feast were welcomed.

His Beatitude will continue the schedule of his visit to Aleppo during the coming days.

Most viewed articles
The Tangled Web98
The Joy of Giving and Serving Others69
Love Endures When All Else Fails69
His Beatitude Patriarch Theophilos III of Jerusalem and All Palestine visits Russian Gethsemane67
Patriarch Daniel: The Tabor Light, perceived by the Hesychasts, is sought by every Christian enlightened at baptism55
Church Damaged during WWII Restored in Serbia43
First Virtual Museum of Roma Holocaust in Romania, Created by MNIR37
Restoring Our Humanity Through the Eucharist7
Most popular authors
Pravmir.com team110
Archpriest Stephen Freeman98
Aurelian Iftimiu92
Archpriest Basil Ross Aden69
Priest Luke A. Veronis69
Fr. Gabriel Bilas7