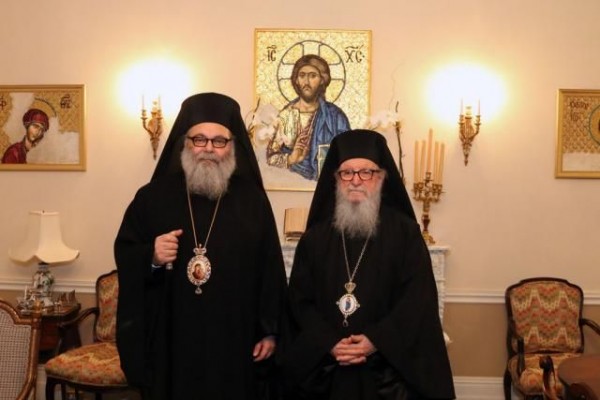 Upon his arrival Patriarch John presided at a service of Doxology at the Archdiocesan Chapel of Saint Paul. Archbishop Demetrios in his welcoming remarks on behalf of the Greek Orthodox Church in America spoke about “the long and close relationship throughout the centuries between the Ecumenical Patriarchate of Constantinople and the Patriarchate of Antioch,” and how it extends to the “close relationship between the Greek Orthodox Archdiocese of America and the Antiochian Archdiocese in America,” which he said “has been fruitful and helped in the promotion of the spirit of collaboration, love and unity among all the Orthodox in America.”

“We are very certain that your presence here shall increase more the bond of love between all the Orthodox in America so that the message of Orthodoxy, which we offer, will be heard in a strong and beautiful way in the Western hemisphere,” said the Archbishop.

Patriarch John X of Antioch in his response spoke about the Orthodox Church as the One, Holy, Catholic and Apostolic Church of Christ and said that the Patriarchate of Antioch will always have an active role in the Orthodox Church and will stand by the Ecumenical Patriarch in all pan-orthodox and inter-orthodox issues. He further said that coming from the Middle East and from a country tormented by war he is mindful of and grateful for the prayers of the orthodox faithful in America and the expressions of love and support of the Ecumenical Patriarch through his letters and phone calls. Patriarch John expressed to the Archbishop his gratitude for the warm welcome and asked for the continuation of prayers and support for the people of the Church of Antioch emphasizing that we are one Church and one family.

Patriarch John X of Antioch was accompanied by the newly enthroned Metropolitan Joseph of the Antiochian Christian Archdiocese of North America and a delegation of clergy and laity from the Antiochian Archdiocese. Following the service of doxology Archbishop Demetrios hosted a luncheon in honor of the visiting Patriarch, his delegation and Hierarchs and clergy of the Greek Orthodox Archdiocese.