Source: Antiochian Orthodox Christian Archdiocese of North America
Natalya Mihailova | 05 December 2014
In an expression of love and solidarity with the suffering Orthodox Christians in the Middle East, St. Vladimir’s Orthodox Theological Seminary presented a gift of $8,000 to Patriarch John X on Thursday, December 4. His Beatitude will personally oversee distribution of the monies, given to alleviate the difficult conditions of the Orthodox faithful of Syria. 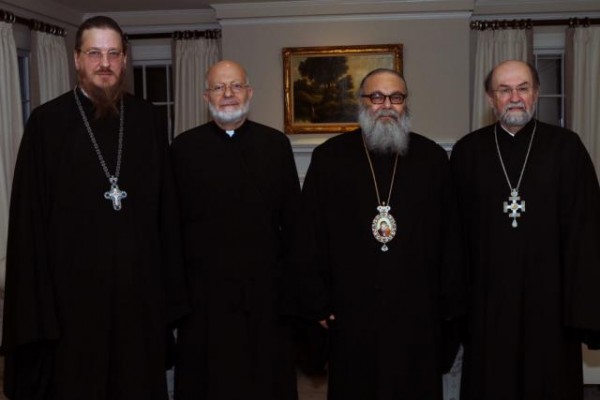 The gift represents a tithe, one-tenth of the total of $80,000 donated to the seminary during its successful #GivingTuesday campaign conducted on December 2. Seminary Chancellor/CEO Archpriest Chad Hatfield and Dean Archpriest John Behr were received by Patriarch John X and Metropolitan Joseph at the Archdiocese headquarters in Englewood, NJ, on His Beatitude’s first full day in the United States. The St. Vladimir’s leaders also gave him a palitza, embroidered with an icon of the Three Hierarchs, patrons of the seminary chapel.

In addition to presenting gifts to His Beatitude, the Chancellor and Dean presented an icon of the Great and Holy Prince Vladimir to Metropolitan Joseph in honor of his upcoming enthronement, and in recognition of his being the newly elected Vice President of the Board of Trustees of St. Vladimir’s Seminary.

Most viewed articles
Critical Theory, Social Justice, and the Attempt to Disfigure the “Transfiguration”183
Patriarch Kirill Urges Believers to Fight New Idolatry in Their Own Lives125
The Frontier of Personhood119
Disoriented70
Bell-Ringing Unites Believers from Different Countries on the Day of the Baptism of Rus (+Video)57
Christ Forgives and Heals1
Saint Macrina the Younger as a Model for our Lives1
Most popular authors
Eric Hyde183
Pravmir.com team182
Archpriest Stephen Freeman119
Fr. Stephen Powley70
Fr. Theodore Stylianopoulos1
Protopresbyter Fr. George Papavarnavas1