Source: Antiochian Orthodox Christian Archdiocese of North America
Natalya Mihailova | 23 May 2014
On Tuesday, May 20th, Metropolitan Silouan led a delegation of members of the Board of Trustees of the Archdiocese to the meeting with His Beatitude Patriarch John X of Antioch at his residence in Balamand (Lebanon). 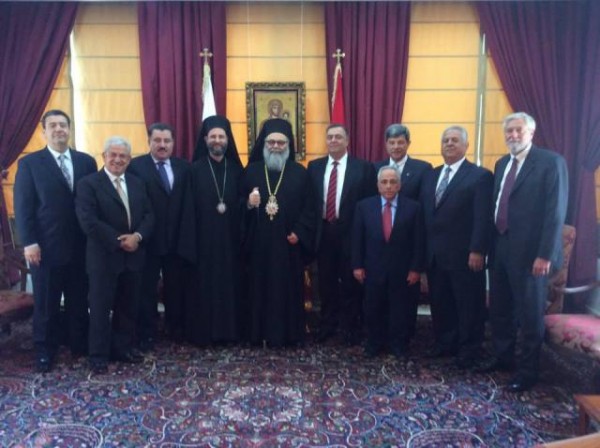 His Beatitude received Metropolitan Silouan in private before meeting the entire delegation. The delegation gave to His Beatitude a letter on behalf of the Board of Trustees unanimously approved at its last meeting on Thursday, May 14th in Chicago. They also presented him with a check of $125,000 as a contribution in the name of the Archdiocese to the humanitarian relief efforts that our Patriarchate is undertaking, especially in the dramatic situation in Syria.

At the end of the interview, before sharing lunch together with His Beatitude, Metropolitan Silouan gave His Beatitude an icon of the Savior that he was given at Saint George Church in Montreal.