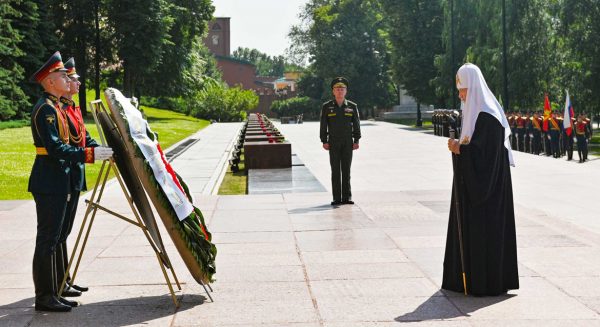 The Great Patriotic War revealed a remarkable unity of our people, both believers and non-believers, said His Holiness Kirill, Patriarch of Moscow and All Russia, on the 80th anniversary of the beginning of this war.

“The enemies had no doubts, so much their power, both military, organizational, and financial, exceeded our people’s strength. But literally in the very first hours of the war, those who entered our land met fierce resistance, which simply amazed them. They continued to be amazed at the courage of our soldiers,” said the Primate of the Russian Orthodox Church on Tuesday, June 22, after the laying of a wreath, a minute of silence and proclamations of “Eternal memory” at the tomb of the Unknown Soldier in the Alexander Garden of Moscow, reports the website “Patriarchia.ru”.

His Holiness Patriarch Kirill called the Victory in the Great Patriotic War historical, adding that “although at that time our Church and our believers, did not have the freedom that they have now, but, nevertheless, everyone united in the struggle against the enemy – both believers and non-believers”.

“The Church blessed the feat of our soldiers, officers and generals, and indeed, some amazing unity of the people occurred under the weight of the terrible danger that hung over Russia and its people,” Patriarch Kirill emphasized.

In conclusion, the Primate of the Russian Church noted that the day of the beginning of the Great Patriotic War is remembered in Russia, “because it was this day from which the liberation and the Great Victory of our people began.”