Victory in the Great Patriotic War was a Miracle of God

Patriarch Kirill of Moscow and All Russia | 11 May 2015
On May 6, 2015, on the feast day of the Holy Great-Martyr George the Trophy-Bearer, on the eve of the seventieth anniversary of Victory in the Great Patriotic War [WWII], His Holiness, Patriarch Kirill of Moscow celebrated the Liturgy in St. George’s Memorial Church on Poklonnaya Hill in Moscow. Following the completion of the divine service, the Primate of the Russian Church addressed the faithful with the following Primatial homily: 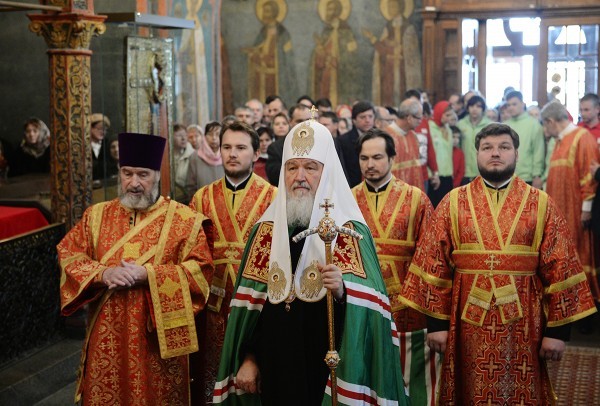 Your Graces! Respected Father Alexis, abbot of the Athonite Monastery of Xenophontos! Your Reverence, Fr. Seraphim, rector of this holy church! Dear Fathers, brothers, and sisters!

I cordially greet and congratulate you all on this great feast day. It was certainly by God’s dispensation that this day, May 6, coincided with the feast of Pascha in 1945 and was welcomed by our entire nation as Victory Day. And we know that it was on May 9 that German signed its capitulation. Behind the victory of our nation, the seventieth anniversary of which we will celebrate with you, is the untold misery and suffering of our people. In the whole history of mankind there has never been such suffering. No other people has offered twenty-seven million lives on the altar of victory. And today these twenty-seven million lives cry out to heaven when someone attempts to rob them of their exploit and rob them of their victory. We will never forget that it was namely our nation that broke the back of the terrible enemy before which all of Western Europe retreated, and which was broken only thanks to the courage and sacrifice of twenty-seven million people, although their military might, organization, and international support surpassed us many times over.

Victory in the Great Patriotic War was a miracle of God. It is enough to imagine that the enemy stood literally a few kilometers from where we are standing ­– but was unable to enter Moscow. The very same enemy that had conquered all of Europe, which was marvelously well-armed and trained! Of course, we bow down before the exploit of our soldiers and our entire nation, which stood up to defend Moscow and all of Russia. From the human point of view, it is impossible fully to explain this victory. And the Church, which regards human history through the prism of the religious perception of life, witnesses to the fact that victory in the Great Patriotic War was a miracle of God. But miracles never take place for no reason. This miracle would never have occurred had not millions of human lives been sacrificed for victory, had not our entire nation not exerted itself, dedicating its ultimate strength to defeating the enemy. And, by God’s mercy, we defeated them.

And it is by no means coincidental that the war was completed on the day of Christ’s Pascha and the feast day of the Holy Great-Martyr George the Trophy-Bearer. How remarkable it is that we call this saint not simply the Great-Martyr, but the Trophy-Bearer [lit., Victory-Bearer], he who bears victory. Not only because he was victorious over evil, victorious over those who martyred him in the beginning of the fourth century, when he was martyred on the orders of the Emperor Diocletian, the last Roman Emperor who persecuted Christians, but also because his name is linked to very many victories. It is also remarkable that his image is on the Muscovite arms.

We believe that victory in the Great Patriotic War also took place through his prayers for our grievously suffering nation, which had travelled in the first half of the twentieth century the terrible roads of bloodshed, civil conflicts, revolution, and wars. The nation that had so cherished faith seemed to have lost this faith entirely, and needed to hearken to this terrible thunderbolt of war in order that the Orthodox faith might again be in an instant resurrected in people’s hearts. Many soldiers went into battle accompanied by the name of God. How many had the prayer of Psalm 90 in their uniforms, which had been carefully sewn there by mothers, wives, and sisters! Our nation achieved victory with prayer and faith. Neither this sacrifice nor this prayer could have been rejected by the Lord, and George the Trophy-Bearer entered unseen on his white horse into the defeated Berlin.

And every time that we celebrate the divine services in this church on Poklonnaya Hill, which is so associated with our victories  – both in 1812 over Napoleon, and in 1945 over the other invaders – we especially pray to the Lord and the Holy Great-Martyr George, that he would not abandon our Fatherland, that our nation would never deviate from the faith of our fathers, and that, relying on this believe, we might grow in spirit and become invincible.

I would like to sincerely thank the Abbot and Archimandrite of the Athonite Monastery of Xenophontos, where a great holy thing is preserved: the right hand of St. George the Trophy-Bearer. It is very rare that one can encounter even the smallest particle of the relics of this Holy Great-Martyr. By God’s mercy, with the blessing of Patriarch Bartholomew of Constantinople, and with the agreement of the brethren of all the Athonite monasteries, with the active participation of Fr. Alexis, the Abbot and Archimandrite of the Monastery of Xenophontos, this All-Christian sacred object has been brought to us on the eve of the seventieth anniversary of the Great Victory. And we will pray to the Great-Martyr George, that he not abandon our armed forces and our nation, that we might ascend from strength to strength – in the first place strengthening our spirit and growing in faith, but along with this being strengthened both materially and militarily, in order to defend our freedom and our independence.

I would also like to thank Fr. Seraphim, the rector of this holy church, for his wonderful gift and for his kind words. And as a sign of my gratitude to the brethren of the Monastery of Xenophontos both for bringing the relics and for bringing the icon of St. George, please accept this Easter egg. Christos Anesti!

Most viewed articles
Seven Lessons for the New Year from St. Seraphim of Sarov231
A Great Time to Join the Orthodox Church137
New Jersey Governor Signs Bill Legalizing Abortion Up To Moment of Birth98
The Way of Christ Is The Way of Love68
Metropolitan Hilarion Celebrates the 20th Anniversary of His Episcopal Consecration56
Metropolitan Hilarion: the Church and traditional confessions have done everything possible to improve the situation in Kazakhstan33
Brooklyn Street Co-Named for Antiochian Pastor Who Served a Half Century There33
Sunday of the Samaritan Woman1
How We Worship: the Struggle of the American Experience1
4-400×6001
Most popular authors
Priest Luke A. Veronis231
Frederica Matthewes-Green137
Ryan Foley98
Pravmir.com team89
Fr. Theodore Stylianopoulos68
Peter Samore33