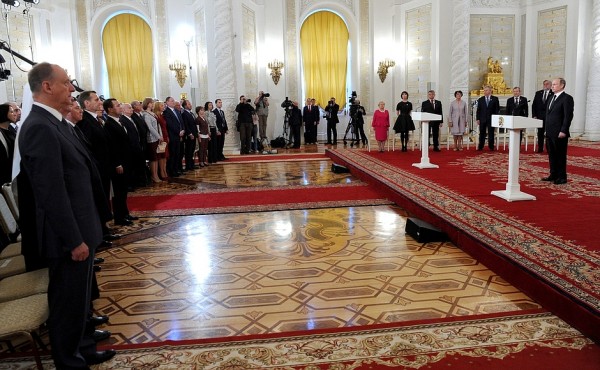 The Primate of the Russian Orthodox Church, His Holiness Patriarch Kirill of Moscow and All Russia attended.

The awards given for outstanding achievements in science and technology, literature and arts, as well as humanitarian work were presented by President Vladimir Putin.

After the ceremony, a grand reception took place at Ivanovskaya Square in the Kremlin. It was attended by political leaders of the country, state award winners, science and art figures and representatives of the traditional religious communities in Russia.

Most viewed articles
What Does Asceticism Look Like?162
Be Bearers of Light100
Orthodox Chapel to Be Constructed in Campina das Missoes74
Metropolitan Mark of Ryazan Explains Why People Sometimes Don’t Know What to Repent of72
Report: 5.2 Billion People Face ‘Very Severe Violations of Religious Freedom’70
Ukrainian Church Calls for De-Escalation of the Conflict in Donbass62
Archbishop of Australia Attends Commemorative Events for Battle of Crete in Melbourne57
The Meekness of God45
Most popular authors
Pravmir.com team332
Archpriest Michael Gillis162
Metropolitan George (Khodr) of Mount Lebanon99
Archpriest Stephen Freeman44
Maria Trushanina1