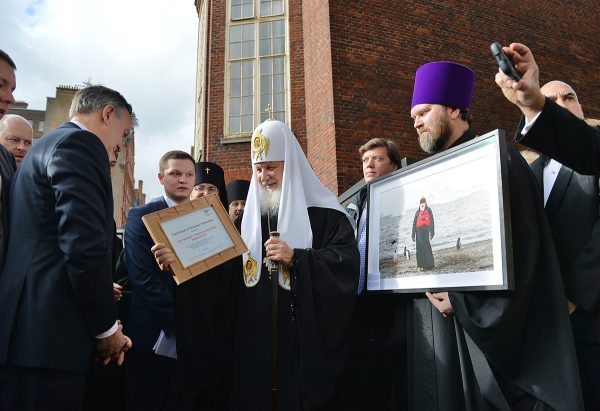 The ceremony was held on Sunday in London as the primate came to the city to celebrate 300 years of the presence of Russian Orthodoxy in the British Isles.

“I managed to visit 120 countries during my life. Some of them have disappeared from the face of the Earth,” the patriarch said at the ceremony in London.

“I can compare what was there 40-50 years ago and what is there today. It enriches me very much, it helps me understand many things going on in the world today,” he said.

The patriarch told that he had to travel a lot in Russia, “especially to the Far East, North, Siberia, because today a powerful revival of the Orthodox faith takes place there.”

He said that he was always glad to meet with local residents, with small nations.

“These small nations bear a powerful spiritual charge, they live in the conditions, in which we cannot survive.”

Patriarch Kirill also presented the members of the Society his picture with penguins made in Antarctica.

A photo exhibition dedicated to the history of Orthodoxy in Britain and Patriarch Kirill’s trips was also opened there.

Patriarch Kirill chaired the Department for External Church Relations of the Moscow Patriarchate in 1989-2009 and visited Great Britain four times. He visited about 120 countries during his life, including 27 countries he visited after his election to the patriarchal see.