Source: TASS: Russian News Agency
Patriarch of Moscow and all Russia Kirill will mark his 70th anniversary on November 20.
Natalya Mihailova | 19 November 2016
MOSCOW, November 18. /TASS/. Patriarch of Moscow and all Russia Kirill I on Friday begins to receive guests in his residence in Moscow on the occasion of turning 70 years old, which he marks on November 20, the Reverend Alexander Volkov, the Patriarch’s press secretary said. 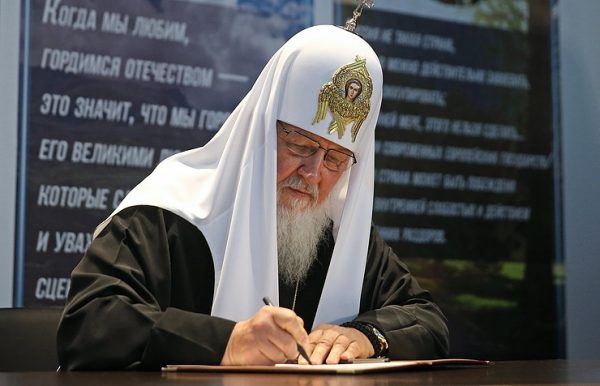 In the period of up to November 22, His Holiness Kirill I will hold dozens of bilateral meetings.

“Beginning on Friday and through to next Tuesday, various events connected with the Patriarch’s 70th birthday will take place,” the Rev Volkov said. “In the first place, he will have meetings with the supreme hierarchs and representatives of other local (national – TASS) Orthodox Churches. There will be bilateral talks.”

“The ruling hierarchs will take up the problems that top the current agenda,” the Rev Volkov said.

The Reverend Igor Yakemchuk, the secretary for pan-Orthodox communications at Moscow Patriarchate’s department for external Church relations, said earlier the delegations of all the fourteen local Churches would arrive in Moscow to celebrate Kirill I’s 70th birthday.

“The delegations of other local Churches will be led by hierarchs,” the Rev Yakemchuk said. “Thus we’ll have all members of the Eastern Orthodox Christian family represented at the festivities.”

Each delegation will have a separate itinerary for sojourn in Moscow.

The Rev Volkov said the Moscow Patriarchate also expected the arrival of delegations of the Roman Catholic Church, the Armenian Apostolic Church “and our Moslem brothers who will also have an opportunity to meet with the Patriarch, which stresses the significance of dialogue between the Orthodox Christianity and Islam.”

“Everything that is unfolding in the Church today has direct links to His Holiness, in the first place,” the Rev Volkov said. “As he marks the 70 years since his birth, the Patriarch feels unwilling somehow to call this date a jubilee and he uses it as an opportunity for contacts and meetings.”

He said along with it the Divine Liturgy that Kirill I would conduct on November 20 in the Cathedral of the Savior in downtown Moscow would become the central event of the celebrations.

The Rev Volkov mentioned the special attention the media gave to the arrival the Catholicos-Patriarch of Georgia Ilia II. The 83-year-old supreme hierarch of the Georgian Church is the oldest Primate of a local Orthodox Church today but he took an unequivocal decision to make a trip to Moscow.

On November 23, Ilia II and the Georgian clerics accompanying him are expected to chant a liturgy in St George’s church in Gruziny – a historical district where the Georgians coming to Moscow resided in the past centuries.

“The liturgy will mark the feast of St George’s breaking on the wheel, which is a date highly venerated in Georgia,” the Rev Volkov said.