Source: Interfax-Religion
"Sanctity has been an ideal of our nation. It was the national idea. Those who achieved it, who realized this national ideal became heroes, heroes of spirit, ascetics, lighteners, and people wanted to follow them."
Natalya Mihailova | 19 July 2014
Moscow, July 18, Interfax - Patriarch Kirill of Moscow and All Russia says sanctity is Russian people's ideal. 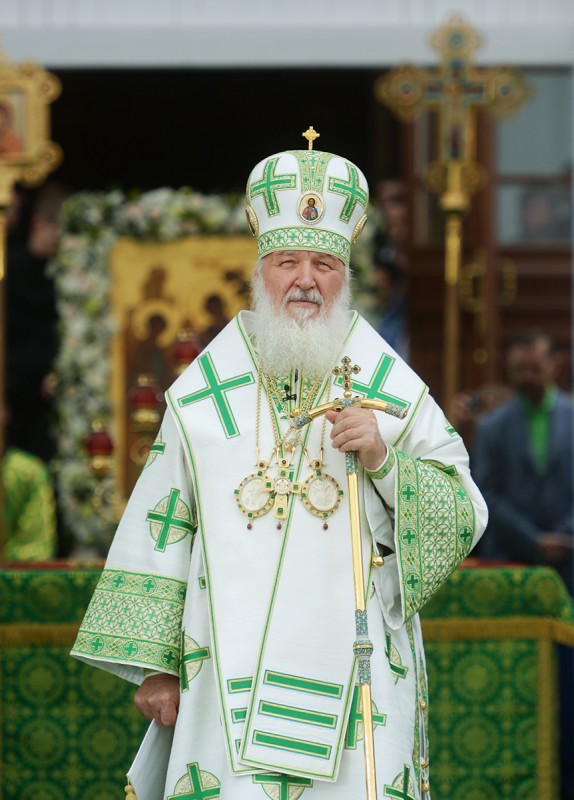 “It becomes clear that Holy Russia is never-dying spiritual and moral ideal of our people and sanctity is an expression of this ideal, its dominant. It’s amazing, but if we ask a simple question: “where else sanctity was the main and the basic ideal of people’s lives?” and here we don’t mean monasteries or some groups of people who devoted themselves to God, but we mean a grand nation,” the Patriarch said after the Liturgy celebrated in the Holy Trinity St. Sergius Laura on Friday, the Feast of finding St. Sergius’ holy relics.

According to him, ideals of other nations are connected with “earthily, physical life – ideals of prosperity, authority, power.”

“Sanctity has been an ideal of our nation. It was the national idea. Those who achieved it, who realized this national ideal became heroes, heroes of spirit, ascetics, lighteners, and people wanted to follow them,” he said pointing out that St. Sergius is one of such examples.

Celebrations dedicated to St. Sergius’ 700th anniversary are going on in Sergiyev Posad. Tens of thousands of believers from Russia and the CIS countries take part in the festival events.

Most viewed articles
Our Lenten Journey155
Moses and the Ten Words131
COVID Directives From His Eminence Metropolitan JOSEPH131
Serbian Patriarch Porfirije Gives Interview to Serbian National Television114
The Wrath of God According to St. John Chrysostom112
New Film about Orthodox Christian Vision on Climate Change111
In Church and at Home: Liturgical Resources for Great Lent85
Bishop Benedict of Bistrița in Relation to Young People: I Want to Be One of Them42
Why We Pray For The Dead1
How We Worship: the Struggle of the American Experience1
Most popular authors
Pravmir.com team225
Priest Luke A. Veronis156
Archpriest Lawrence Farley131
Archbishop Joseph of New York and Metropolitan of All North America131
Archpriest Michael Gillis112
Peter Samore85
Aurelian Iftimiu42