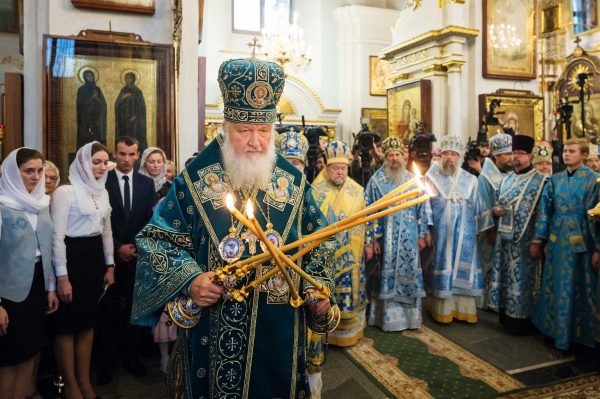 Photo by Tatiana Amelina, foto.patriarchia.ru. Vespers at the Holy Spirit Cathedral in Minsk

Minsk. October 13. – His Holiness, Patriarch Kirill of Moscow and All Russia, believes that the Ukrainian Orthodox Church will be able to resist the attacks that the secular authorities are carrying out on it today.

“We know how difficult it is today in the brotherly land of Ukraine. We know how the enemy of the human race turned against the Orthodox Church, which has gone through severe tests. However, we believe that the gates of hell shall not prevail against the Church, we are convinced that no secular forces which have the goal of destroying the Church will ever succeed,” said His Holiness, Patriarch Kirill, after the Vespers at the Holy Spirit Cathedral in Minsk on Saturday, where he had arrived on a three-day visit.

The Primate of the Russian Orthodox Church called all those who doubt this to “remember again when the authorities considered it their goal to destroy any faith, especially the Orthodox Church, not so long ago.”

“Indeed those attacks on the entire body of the Church were so powerful! But all was in vain. The Church suffered from the blows, but was never broken. The Church remained the spiritual force that ultimately ignited people’s feelings and inspired them to lead a completely different lifestyle,” the primate pointed out.

He noted that during his current visit to Belarus there will be a “crucial meeting” of the Holy Synod of the Russian Orthodox Church in Minsk, at which the members will make decisions connected with the assessment of the church situation in Ukraine.

“I ask all of you to pray that the Synod decisions contribute to bringing peace to the agitated Ukrainian society, so that your prayers and the work of the Synod would help to strengthen church life in Ukraine, and to protect our Church from possible attacks and oppression,” His Holiness, Patriarch Kirill, told believers of Belarus.

The Synod of Constantinople, which completed its work on Thursday in Istanbul, accepted the leaders of the Ukrainian schism in communication, announced the establishment of its residence in Kiev, and terminated its own decree accepted more than 300 years ago on the transfer of the Kiev Metropolia to Moscow.

In response, the Russian Orthodox Church stated that these actions force the ROC to sever the Eucharistic communion with the Patriarchate of Constantinople.