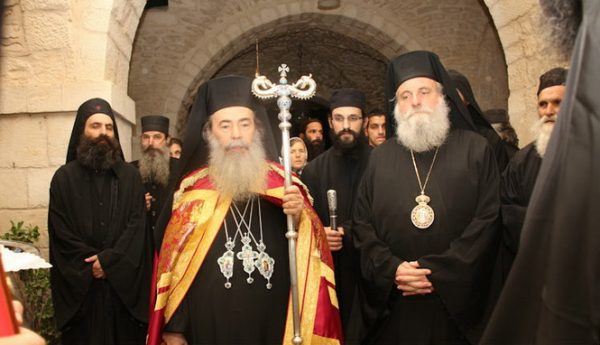 The Jerusalem Orthodox Church prays for the unity of Orthodoxy and hopes that it will be possible to resolve the conflict between the Ecumenical and Moscow Patriarchates through dialogue, a representative of the Jerusalem Patriarchate told RIA-Novosti today.

“We always pray for the unity of the Church. We believe that an appropriate solution to this situation will be found through discussion. We are concerned about this and we pray for unity. We want there to be love between the Churches,” the representative said.

He also expressed confidence that “Jesus Christ will not abandon the Church, because, as the Gospels say, it is built on a rock, and the gates of hell shall not prevail against it.”

The Jerusalem Churches hopes that it will be possible to solve the Ukraine problem through dialogue with the participation of the Local Churches of the Orthodox Church, the interviewee added.

This aligns with the earlier statement of His Eminence Archbishop Theodosios of Sebastia of the Jerusalem Church, who called on the primates of the world’s Orthodox Churches to immediately join in the settlement of the current dispute, which is, according to him, fraught with disaster for the entire Orthodox world.

The same Jerusalem hierarch has also stated that the Jerusalem Patriarchate recognizes Ukraine as the canonical territory of the Ukrainian Orthodox Church under His Beatitude Metropolitan Onuphry of Kiev and All Ukraine, an autonomous and self-governing body of the Russian Orthodox Church.

In calling for dialogue between the various Orthodox Churches, the Jerusalem Church echoes the call of not only the Russian Church, but also of the Romanian Synod which met yesterday, and the Antiochianand Georgian Holy Synods. The same call has also been made by the primates of the Polish, Serbian, Antiochian, and Czech and Slovak Churches, and also by a joint Antiochian-Serbian statement.

His Beatitude Patriarch Theophilos III of Jerusalem has consistently criticized the violent actions of the schismatic bodies in Ukraine, calling them “lost.” Conversely, the Ecumenical Patriarchate recently entered into communion with the two bodies of Ukrainian schismatics.

According to Evstraty Zorya, the speaker for the schismatic “Kiev Patriarchate,” who Constantinople now considers a canonical bishop under its jurisdiction, as they have reclaimed Ukraine as their canonical territory, has stated that Constantinople rejects the call for a pan-Orthodox discussion on the matter, but will move ahead unilaterally.