Source: Interfax-religion
Natalya Mihailova | 28 November 2016
Moscow, November 28, Interfax - Patriarch of Moscow and All Russia says he will always remember Fidel Castro, who was not only a legendary person, but a true friend of the Russian Orthodox Church. 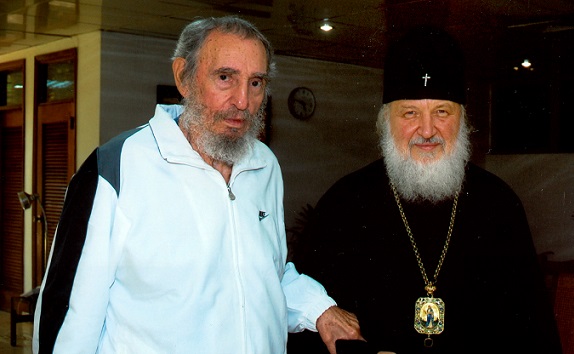 “Comandante Fidel was one of the most well-known and prominent state figures of the present time, enjoyed international authority and became a legend when he was alive. He was from the flesh of the Cuban people and focused his force on gaining true independence for his Motherland and giving it a worthy place in the family of nations,” the patriarch said in his letter of condolences to the head of the Cuban State Council and government Raul Castro.

According to Patriarch Kirill, the Russian Orthodox Church pronounces Castro’s name “with respect and gratitude.” The Church of Our Lady of Kazan in Havana was built with the comandante’s personal participation, and the primate writes that Fidel called himself “the commissioner of the building site.”

“I keep the warmest memoirs of my meetings with Comandante Fidel. I was always impressed by the grandeur and acuity of his mind, ability to speak competently on various topics,” Patriarch Kirill writes.

When he was young, the comandante was keen on the ideas of revolution and socialism, but he stood for cooperation with believers in struggle for the fair society and he once said that “there are ten thousand times more coincidences between Christianity and Communism than between Christianity and Capitalism,” and “a martyr for a religious idea” is made “of the same material as the revolutionary hero.”

However, Castro confessed that he “failed to become a true believer and adopt a religious faith,” but instead he acquired “a political faith.”

In the mid 2000s Castro approved of building a Russian Orthodox church in center of Havana and Cuban people built it on their own money.

This February a historic meeting between Pope Francis and Patriarch Kirill was held in the Cuban capital.

Most viewed articles
What Is the Mark of the Beast?222
Film about Priest’s Large Family Made in the Volyn Diocese of the UOC170
Angels: Their Role in our Lives and Worship131
243 Refugees in Lesvos Test Positive for COVID-19, while Mt Athos Monastery Quarantined112
Perfecting Our Lives107
Patriarch Daniel of Romania: Today We Have Opened a New Gate to Heaven83
Working Together with Christ65
A priest refused gifts on his birthday. Instead, his close ones paid for the rehabilitation of the boy with cerebral palsy38
Bishop Teodosije Encourages Kosovo Serbs to Not Abandon Their Homes, Churches, Monasteries35
Patriarch Daniel: When Church is Full, Community Takes Form of Cross Directed to Resurrection32
Most popular authors
Pravmir.com team317
Archpriest Michael Gillis222
Archpriest George Shalhoub131
Aurelian Iftimiu115
Archpriest Thaddaeus Hardenbrook107
Archimandrite Jack (Khalil)65
Taisia Sidorova38
Archpriest Stephen Freeman1