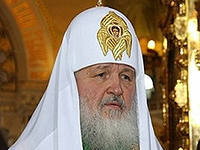 Patriarch Kirill has called on the elites not to seek the salvation of Russia from foreigners. He said this on Saturday, the feast-day of the holy Patriarch and Martyr Hermogenes, after a service had been celebrated on the site of the future monument to the saint in the Alexander Garden outside the Kremlin, reports RIA Novosti.

The head of the Russian Orthodox Church believes that in the 17th century, invaders were able to take power in Moscow with ease, as representatives of the Moscow elite “considered the occupation of Russia to be a good thing, as a way of raising the standard of material life and the cultural standard, and to partake of European values.”

Patriarch Kyrill also noted the importance of the figure of Patriarch Hermogenes as an authority for ordinary people who did not agree with the elites: “And why did the enemies demand help from the Patriarch? This was because they realized that the people—the same common people who decide and have always decided Russia’s fate, did not agree with the elites, it did not accept temptations, it lived its own inner life and only one voice could influence it—the voice of the Patriarch… But he (Hermogenes) lived one life with his people, and that powerful elite class which tried to destroy the unity of the country was, in reality, alien to both the Church and the people.”

Patriarch Hermogenes was shut up in the Monastery of the Miracle of the Archangel Michael because he refused “to betray his motherland”, and there he died of hunger. But even imprisoned, Hermogenes continued to call on the Russian people, blessing it for a war of liberation from the invaders, and his calls reached Minin and Pozharsky, who led the people’s volunteer corps and went down in history.