Source: Interfax-religion.com
Natalya Mihailova | 17 November 2014
Belgrade, November 17, Interfax - Patriarch Kirill of Moscow and All Russia has spoken in support of the Serbian population of Kosovo and Metohija. 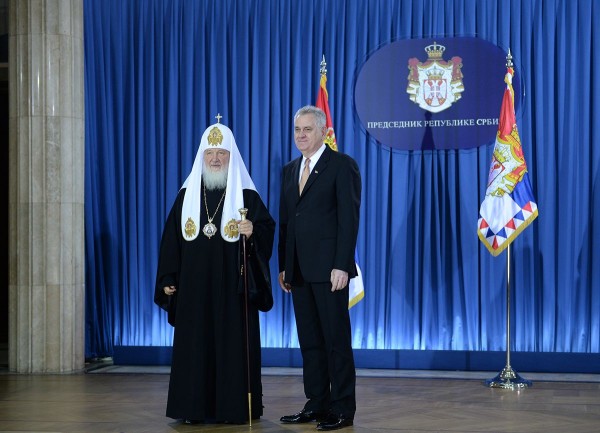 “Serbs should live freely in Kosovo and Metohija. No one should threaten Serbs, no one has the right to destroy their monuments, their churches and monasteries. No one can create problems with their travels or prevent them from maintaining constant contact with their relatives,” the patriarch told reporters after meeting with Serbian President Tomislav Nikolic in Belgrade.

Kosovo and Metohija are the spiritual center of the people of Serbia and the Serbian Orthodox Church, and “that says a lot,” Patriarch Kirill said.

“We insist on what we have always insisted: we support the people of Serbia in their understanding of the problem of Kosovo and its historical significance and the way such issues should be resolved politically. They should be resolved in such a way that fundamental human rights and freedoms should not be violated. We are primarily concerned about the rights and freedoms of the Serbian population of Kosovo,” Patriarch Kirill said.

The patriarch said the Russian Church is trying to help the Serbian population in Kosovo and Metohija and is raising money to support them.

In May-June 2014, the Russian Church provided assistance to Serbia, which had been hit by heavy rainfall, by transferring 27 million rubles raised in the dioceses of the Moscow Patriarchate to the account of the Serbian Orthodox Church.

In July 2013, an extra 50,000 euro was transferred to the account of the Prizren Spiritual Seminary. The 145,000 euro raised by the Russian Church monasteries were sent to Serbia in a separate tranche.

Most viewed articles
“Do Not Weep”145
Best Films of the Pokrov Film Festival Have Been Determined129
Christ the Life Giver129
(VIDEO)Celebrating 5 years of Byzanfest International Orthodox Film Festival79
The Religion of Self79
Patriarch Kirill Answers Questions from Participants of the Ninth Faith and Word Festival74
“He preached the message of the Resurrection for 12 years”: First Bishop of Deva Gurie Georgiu laid to rest at Cathedral of St Nicholas19
Patriarch Kirill: “An Effective Way to Overcome Social and Economical Dead End Is to Be Guided by the Word of God”11
Using Our Time Wisely to Cultivate the Seeds of Faith2
Most popular authors
Pravmir.com team293
Archpriest Peter Olsen145
Fr. Theodore Stylianopoulos129
Fr. Gabriel Bilas79
Aurelian Iftimiu19
Priest Luke A. Veronis2