Source: Interfax-religion
Natalya Mihailova | 23 December 2016
Moscow, December 22, Interfax - Before the 100th anniversary of the 1917 revolution, Patriarch Kirill of Moscow and All Russia called on the people of Russia to learn lessons from the events that took place a century ago. 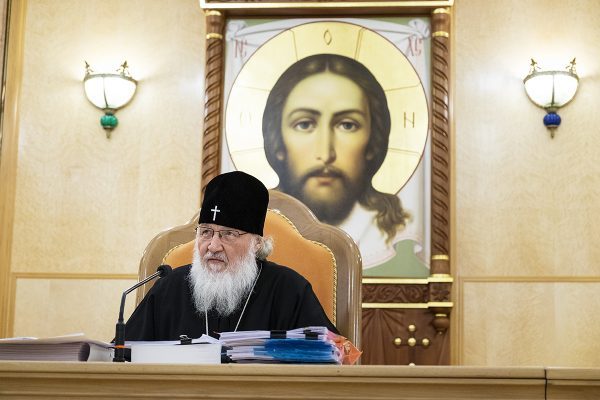 “The coming year 2017 is a special year for our Church and all countries of the canonical responsibility of the Moscow Patriarchate. This year is connected to the memories of events that took place a century ago, when two revolutions shook our country,” the patriarch said in his report at the Moscow Diocese assembly held in the Cathedral of Christ the Savior on Thursday.

Realizing the causes of the 1917 disaster and drawing conclusions from the events that followed is not a theoretical task, but a practical one, he said. When resolving this task, “it is important to avoid overstating or forgetting the heroism of our people, all those good things that happened in the past years, as well as understating or retouching the troubles and confusion that our Motherland went through after 1917,” the patriarch said.

One of the important lessons from the past century is that a “society built on opposing God and his eternal moral law is destined to self-destruction,” he said. “One should remember that today, when attempts are being made in some countries to build people’s life and the system of public relations while marginalizing religion,” the patriarch said.

“Our pastoral mission, our daily work assume a historical dimension in this perspective,” he said.

Most viewed articles
The Tangled Web98
The Joy of Giving and Serving Others69
Love Endures When All Else Fails69
His Beatitude Patriarch Theophilos III of Jerusalem and All Palestine visits Russian Gethsemane67
Patriarch Daniel: The Tabor Light, perceived by the Hesychasts, is sought by every Christian enlightened at baptism55
Church Damaged during WWII Restored in Serbia43
First Virtual Museum of Roma Holocaust in Romania, Created by MNIR37
Restoring Our Humanity Through the Eucharist7
Most popular authors
Pravmir.com team110
Archpriest Stephen Freeman98
Aurelian Iftimiu92
Archpriest Basil Ross Aden69
Priest Luke A. Veronis69
Fr. Gabriel Bilas7