Source: DECR
Natalya Mihailova | 23 June 2015
In the morning of 21 June 2015, His Holiness Patriarch Kirill of Moscow and All Russia, currently on his primatial visit to the Byelorussian Exarchate, arrived in Brest by plane and proceeded to the Cathedral of the Resurrection, where he celebrated the Divine Liturgy on the 3rd Sunday after Pentecost, the feast day of the Synaxis of the Byelorussian Saints. 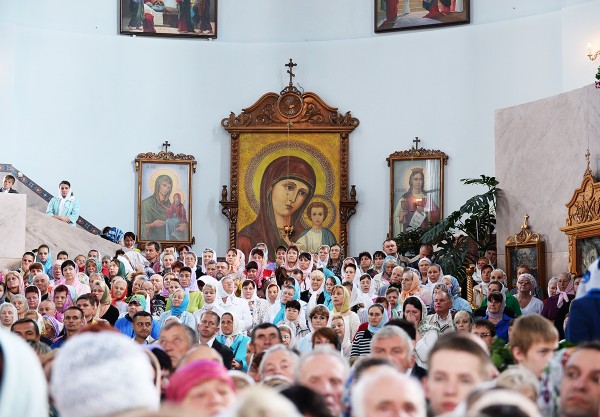 Prior to the divine service, His Holiness led the ceremony of the meeting of the shine with a particle of relics of St. Prince Vladimir Equal-to-the-Apostles held in the context of the celebration of the 1000thanniversary of the demise of the Baptizer of Rus’. The shrine is being brought to the dioceses of the Russian Orthodox Church from the Moscow Cathedral of Christ the Saviour.

Concelebrating with His Holiness were Metropolitan Pavel of Minsk and Zaslavl, Patriarchal Exarch of All Belarus; Metropolitan Hilarion of Volokolamsk, chairman of the Moscow Patriarchate’s Department for External Church Relations;

eight archbishops, including two of the Polish Orthodox Church, twelve bishops; and clergymen from Moscow and the Byelorussian Exarchate.

Attending the service were Mr. Gulyako, chairmen of the Brest regional and city executive councils, and Consul General Mr. Matkovsky of the Russian Federation in Brest.

After the Litany of Fervent Supplication His Holiness offered up a prayer for peace in Ukraine.

The Liturgy was broadcast on large screens put in front of the Cathedral and on the Soyuz’ TV channel.

After the Liturgy, the doxology was proclaimed to St. Vladimir and all the saints who shone forth in the land of Byelorussia.

Metropolitan Pavel and Bishop Ioann of Kobrin greeted His Holiness on behalf of bishops, clerics and laymen of Byelorussia and presented him with an icon of the holy martyrs Athanasius and Macarius and archdeacon Nicephoros.

The Primate of the Russian Church addressed his primatial homily to the worshippers, presented Metropolitan Pavel and Bishop Ioann with panagia and cross made in honour of the 1000th anniversary of St. Vladimir’s demise, and donated an icon of the Twelve Great Feasts to the cathedral.

Standing on the steps of the cathedral, His Holiness released doves and blessed the worshippers.

Most viewed articles
You Are Not Alone – And Neither Is God120
Thank God at All Times107
Metropolitan Onuphry: Martyrs Are an Example of Greatest Love for God99
His Grace Bishop Alexis Returns from Visit to Russia83
Patriarch Kirill’s condolences over the death of people in a car crash in western Bulgaria74
Pastoral Message from Metropolitan Tikhon for Thanksgiving Day 202158
I Cannot Change God’s Will. Does It Mean that Prayer is Useless?28
Most popular authors
Pravmir.com team256
Archpriest Stephen Freeman121
Priest Luke A. Veronis107
Metropolitan Tikhon of All America and Canada58
Fr. Eugene Murzin28