On 14 March 2014, Friday of the second week of Lent, His Holiness Patriarch Kirill of Moscow and All Russia celebrated Vespers and the Liturgy of the Presanctified Gifts at the Cathedral of Christ the Saviour in Moscow. That day marked the 38th anniversary of his episcopal consecration. 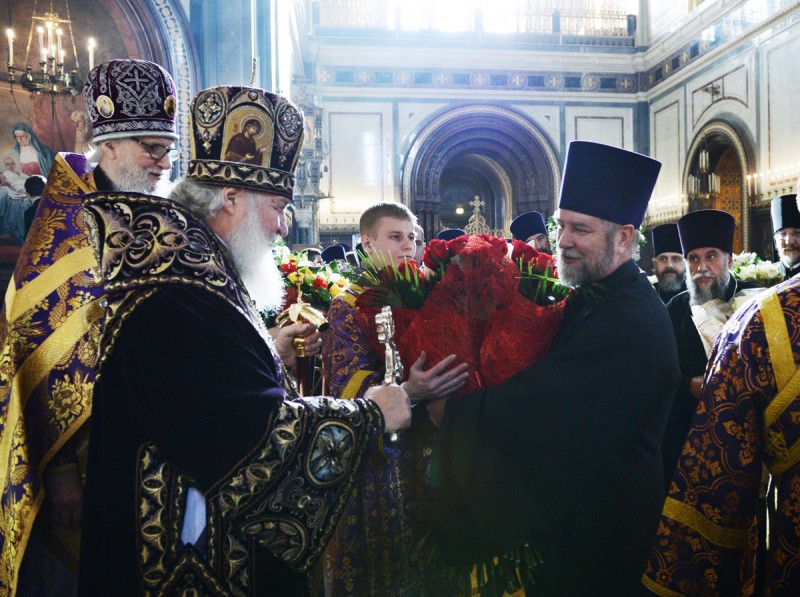 Concelebrating with Patriarch Kirill was an assembly of hierarchs and clergymen of the Russian Orthodox Church.

After the Liturgy, Metropolitan Juvenaly of Krutitsy and Kolomna congratulated His Holiness Patriarch Kirill on the 38th anniversary of his episcopal consecration on behalf of the Holy Synod, Synodal institutions, clergy, monastics, and laypeople of the Russian Orthodox Church. Metropolitan Juvenaly said in particualr:

“Your Holiness, thirty-eight years have passed since the day of your episcopal consecration. Prophetic were the words of Metropolitan Nikodim of Leningrad about a long spiritual path of your ministry when he handed over to you, with love and hope, a bishop’s staff. We can assert that not a single day has been lost during those thirty-years of your service for the benefit of the holy Church of Christ.”

“It is remarkable that your episcopal consecration took place on the Sunday of Orthodoxy,” Metropolitan Juvenaly continued, reminding those present that several days ago, His Holiness Patriarch Kirill had celebrated the Divine Liturgy in Phanar with the Primates of other Orthodox Churches on the Sunday of Orthodoxy. The Message issued by the Primates in Phanar heralded the convocation of the long-awaited Pan-Orthodox Council in 2016. “I know that the faithful of the Ukrainian Orthodox Church were particularly inspired by the Message,” Metropolitan Juvenaly added, “because, thanks to you, calls to peace, unity, and accord in the Ukrainian land were included in the Message.”

His Holiness Patriarch Kirill addressed the worshippers with his primatial homily, focusing on the situation in Ukraine.