On March 27, 2013, the Church-Public Organizing Committee for the 1025th Anniversary of the Baptism of Russia met at the patriarchal residence in the St. Daniel Monastery. It was chaired by His Holiness Kirill, Patriarch of Moscow and All Russia. 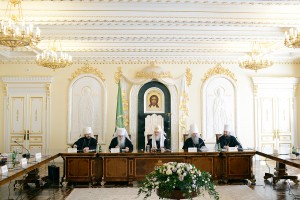 Along with hierarchs and clergy of Belarus, Russia and Ukraine, the committee includes high governmental officials in the three countries.

Opening the meeting, Patriarch Kirill said that the 1025th anniversary of the Baptism of Russia is a date of great importance for the peoples of Belarus, Russia and Ukraine and for all the countries of the historical Rus’. ‘The celebration is called to help people sense the breathing of history, to feel their spiritual kinship and to contemplate their free distinctive path to the future. It is to the Baptism of Russia that we owe the formation of our unique civilization. Faithfulness to spiritual foundations is a guarantee that we will remain what we are. It means that we will be truly happy because those who betray themselves or who are dependent cannot be happy’, he said.

Patriarch Kirill also pointed to a large-scale religious revival that has happened in the last 25 years. ‘The 25 years which began with the Millennium of the Baptism of Russia have been marked with radical changes in the life of our nations and the Church. These transformations are manifested in a fundamental change in people’s attitude to the significance of Christian values in the life of our peoples’, he said.

‘We have to fix these years of church revival in people’s historical memory’, he continued, ‘From the point of view of ecclesial and religious life, these 25 years is a phenomenon which has no equal in the world history. Never and in no part of the globe so many churches have been built and so many Christian communities have been established for such a short period of time. Nowhere is there such a powerful breakthrough in church life and religious life in general as in the vast lands of the Holy Russia. What is the force that has moved our nations to the achievement of such a grandiose transformation? There is something to think about’.

His Holiness expressed the conviction that it was the development of people’s religious life that became the engine of the transformations in people’s life. ‘Indeed, the point is not only new churches and monastery, a new constellation of clergy and episcopate but results of cooperation which the Church has maintained with society and the world, a real initiation of millions to the Church, a change in their psychology, life guidelines and personal and hence public ethics’. All this happens at a time when we speak of a world economic crisis, which, analysts believe, is caused by a crisis of the human personality’, he reminded the audience.

‘In connection with celebrations to mark the 1025th anniversary of the Baptism of Russia, we should make this path and its importance visible and understandable for our people and the whole world. The forthcoming celebrations should become an incentive for further spiritual, cultural and comprehensive development of our nations’, he concluded.

The patriarchal introduction was followed by a discussion on the program of main events and public initiatives made for the celebrations marking the 1025the anniversary of the Baptism of Russia.