Patriarch Kirill chairs a meeting of the Patriarchal Council for Culture 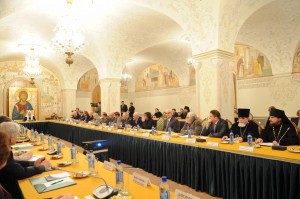 On March 27, 2013, His Holiness Patriarch Kirill of Moscow and All Russia chaired a meeting of the Patriarchal Council for Culture that took place at the St. Sergius Hall of the Church of Christ the Saviour in Moscow.

In his opening remarks, Patriarch Kirill spoke of the need to develop a public strategy in culture, education and formation as was stated in a message to the Russian president approved by the Patriarchal Council at its previous meeting. The message concerned a cultural crisis as one of the most dangerous for any society as it erodes the nation’s values, disorientates the youth and deprives the people of the future. There is a growing apathy and disbelief in positive changes, ‘with a part of society developing extremely radical moods, even the readiness to crush everything to the ground again’.

Patriarch Kirill made a report about several church projects aimed to settle some cultural conflicts, such as the one between the Church and the museum community, and to encourage diocesan clergy and laity for cooperation with museums in the efforts to preserve the national cultural heritage. He also enumerated a number of events held by the Church in the field of culture.

Speaking about the plans of the Patriarchal Council for Culture for 2013, he mentioned the celebrations to mark the 400th anniversary of the Romanov Dynasty, the traditional exhibition called ‘the Orthodox Rus’, and the program called ‘Russia’s History: Spiritual Link Between Times and Generations’.

Most viewed articles
How Can We Evangelize Today?202
Five Signs of a Modern Pharisee189
Trial of Politician Defending Traditional Marriage Begins in Finland100
Medical Workers Walk 1.5 Km Through Snowdrifts and Save the Life of a 100-Year-Old Woman97
Bad Habits And Their Cure69
Grains of Wisdom and Piety Book Published68
ROC Holy Synod Discusses the Announcement of the Patriarchate of Alexandria Concerning the Establishment of the ROC Patriarchal Exarchate of Africa50
Patriarch Daniel prays for Romania’s national unity, peaceful coexistence and dignified cooperation with other peoples37
150th anniversary of the establishment of the North American diocesan see in San Francisco31
Most popular authors
Pravmir.com team346
Frederica Matthewes-Green202
Archimandrite Markell (Pavuk)189
Saint Nicodemus the Hagiorite69
Aurelian Iftimiu37