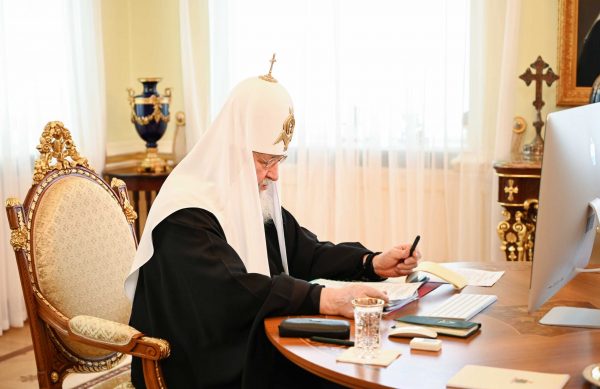 On March 26, 2021, His Holiness Patriarch Kirill of Moscow and All Russia chaired a meeting of the Supreme Church Council of the Russian Orthodox Church, which took place in a remote format reports patriarchia.ru.

Opening the meeting, His Holiness Patriarch Kirill addressed the participants with an opening speech, in which he talked about a number of topical issues of church, social and inter-religious relations and presented the agenda of the meeting, noting, in particular, that it will consider the issue of the Expert Council under the Patriarch for interaction with the Islamic world.

“For many decades the Russian Orthodox Church has been actively involved in interreligious dialogue, and dialogue with the Islamic world remains the most important direction in this work. We are in solidarity with the representatives of Islam on many issues, primarily, the protection of traditional values, including family values, and strengthening the principles of mercy and justice in the life of society. However, sometimes it starts to seem that all the right words have already been said, all the declarations have been adopted, and the question arises: what next? That is why it is necessary to constantly monitor everything that is happening in the sphere of church relations with Islam, and to make adjustments to this trajectory, adding, if required, new content to our relations. As long as there is religious motivation for people’s actions, our non-religious enemies will try to use naturally existing differences to stimulate deeper divisions. But faith is designed to give people the strength to create, as it has been for millennia. Therefore, we have great potential – when I say “we”, I mean religious people, to strengthen, despite the differences in our traditions, the system of cooperation and interaction that already exists and should gain strength. We must be kind and open to communication not only during interfaith forums. In the face of ever-increasing challenges from the secular world, it is important to strengthen our solidarity in protecting the right to practice and live our faith. The content may be different, but the framework itself is acceptable for all traditional religions – I think we must work within this framework.

“The development of relations with the Islamic world today is of particular importance also because attempts to impose false values, especially in the family sphere, are a common challenge for us and for them. We have many topics to work with together, and we must use the common interests arising from the social, political, cultural context in which we all find ourselves today. Therefore, it seems necessary to develop interaction with Islam both in the countries of canonical responsibility of the Russian Orthodox Church and throughout the world. We have created an Expert Council on Interaction with Islam, and I hope that today we will be able to discuss everything that concerns our relations with the world of Islam in more detail.

“Certainly, international conflicts pose a challenge to interreligious harmony. They cannot but affect interreligious relations, and often there is a threat of transferring these conflicts to the religious plane. In this regard, I cannot avoid mentioning the escalation of the conflict in Nagorno-Karabakh, where blood was shed, but thanks to the actions of religious leaders, it is possible to prevent this conflict from being redirected from the political and interethnic to the inter-religious channel. I was in constant contact with both the Catholicos of All Armenians and the Supreme Mufti of Azerbaijan, and I must say that this lively, natural contact contributed to the fact that religious leaders as much as possible for them (after all, they are also under the strong pressure of their environment), nevertheless entered into a certain contact, and by the grace of God it was again possible to prevent the filling of the political conflict with religious content. All this became possible as a result of many years of peacemaking efforts with the participation of the Russian Orthodox Church. Of course, all these actions did not resolve the conflict, but they put an obstacle on the way of its transformation into a religious war. Our maximum goal is to stop any conflict, to breathe a peaceful spirit into people, but it is not always possible to do this in a short period of time. But the specific goal – to prevent the conflict from escalating into a religious war – was set and, by the grace of God, achieved.

“I believe and hope that the religious leaders of Azerbaijan and Armenia will still contribute to ending the confrontation, to reconciliation between peoples, and representatives of religious groups of both Azerbaijan and Armenia will undoubtedly participate in this process, driven by a common desire to end the conflict and restore peace. Friendship and understanding between believers living by their convictions is a force that gives hope to overcome differences and build a just and lasting world, and each of us, as religious leaders, has a responsibility to contribute to this. I am glad that in carrying out this service as Patriarch of the Russian Orthodox Church, I have very kind, wise co-negotiators both in the person of the religious leader of Azerbaijan and in the person of the Patriarch and Catholicos of all Armenians. It is no coincidence that I touched upon the topic of interreligious tension that arose in connection with Karabakh, in order to emphasize once again that we have, perhaps, limited, but still real opportunities to use the religious factor and a particularly wise, prudent, I would say, pastoral position of both the Catholicos of All Armenians and the head of the Muslims of Azerbaijan, in order to contribute to the strengthening of peace and stability in this region. I wanted to say this, starting the meeting of the Supreme Church Council, and maybe we will come back to this topic today,” the Patriarch said.