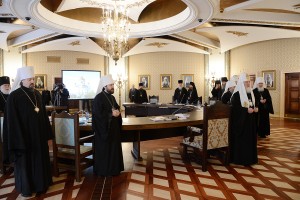 The Supreme Church Council is an executive body of the Russian Orthodox Church accountable to the Patriarch of Moscow and All Russia and the Holy Synod of the Russian Orthodox Church. The terms of reference include theological education, public education, mission, the Church’s social service and the church mass media, church-state and church-society relations, relations with Local Orthodox Churches, non-Orthodox confessions and non-Christian religions, church administration and economic work and other matters.