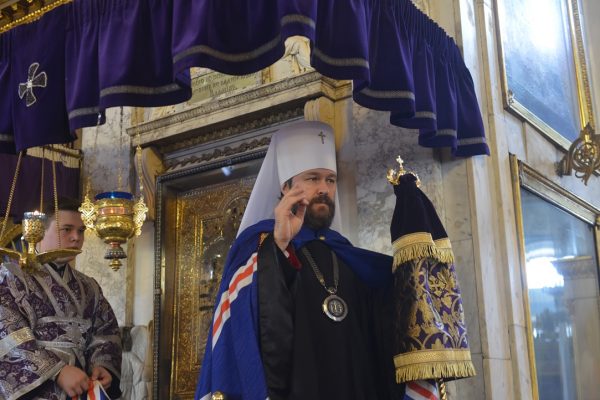 On March 31, 2019, the 3d week of the Great Lent, the Sunday of the Adoration of the Cross, Metropolitan Hilarion of Volokolamsk, head of the Moscow Patriarchate department for external church relations (DECR), celebrated the Divine Liturgy of St. Basil the Great at the Moscow church of Our Lady the Joy to All the Afflicted-in-Bolshaya-Ordynka.

The day marked the 10th anniversary since Metropolitan Hilarion was appointed as head of the DECR.

After the service, the worshippers venerated the cross taken out to the center of the church.

‘The Most Rev. HILARION

Ten years have passed since by the Holy Synod decision you were appointed as head of the Department for External Church Relations of the Moscow Patriarchate. I would like to thank you cordially for the help you and your co-workers give me in my hard Primatial ministry. I highly appreciate the contribution made by your synodal department to bearing witness to Christ before the world, to the beauty and truth of the Orthodox faith.

It is gratifying to note that the Department exerts every effort to establish good relations between fraternal Local Churches and peoples and advocates the unshakable principles of church order rooted in the patristic tradition.

May the God of love and peace be with you (2 Cor. 13:11) on the paths of your further archpastoral ministry, giving strength to you and your co-workers in the power of His might (Eph. 6:10).

Patriarch of Moscow and All Russia’

Then Metropolitan Niphon made a speech on behalf of the representatives of Local Orthodox Churches to the Moscow Patriarchal see. He said that Metropolitan Hilarion inherited from his outstanding predecessors a serious and strong department, which he managed skillfully. ‘Under your guidance, your competent team well-versed in not only Orthodoxy but also other confessions and religions really help to form strong human relations in the world so necessary in our difficult time of mutual alienation’. Praising Metropolitan Hilarion’s merits as a highly educated leader and composer, he also thanked his mother for giving him an excellent education including a musical one. He also commended Metropolitan Hilarion’s sermons as genuine peaching of Christianity and Orthodoxy and enhancement of the authority of the Russian Church.

Archimandrite Seraphim read out a congratulatory message from His Beatitude Rostislav, Metropolitan of the Czech Lands of Slovakia, pointing out in particular that at a time of great changes in international relation, ‘we give a great value to your efforts not only to preserve but also strengthen the church unity, relying on the solid foundation of Orthodox doctrine and canon law’.

Then Metropolitan Hilarion delivered an archpastoral homily, in which he spoke first on the theme of the day, the Adoration of the Cross, saying in particular, ‘We are those for whom Christ made His redemptive sacrifice on the cross…, and we should remember what a great price was payed for each of us and for our salvation’.

He also thanked Patriarch Kirill ‘for confidence in me shown 10 years ago and through these years’.

Speaking about the external relations of the Russian Orthodox Church, His Eminence said: ‘We went through a period of well-being and prosperity, many achievements and gains. But the period of welfare has been replaced by trials through which we are going today together with all the Local Orthodox Churches. And we hold very dear the support of the Local Orthodox Churches, which we can feel in everything we are doing. We are not struggling for any personal or particular interests; we are standing up for the canonical ecclesial truth, defending it with all the humbleness and trust in the mercy of God.

‘For me as head of the Department for External Church Relations, it is especially gratifying to note that the actions of the Patriarch of Constantinople, which were aimed personally against His Holiness Patriarch Kirill and against our Church, once a daughter of the Church of Constantinople and now a sister equal to her, have found no support from any of the Local Orthodox Churches. This support of the Local Orthodox Churches, which we can feel today, costs a good deal’.

His Eminence asked Metropolitan Niphon to convey ‘our cordial gratitude to His Beatitude John, the head of the Orthodox Church of Antioch, for his firm canonical stand, which he calmly advocates with trust in God’ providence in the interchurch relations.’

He also thanked the DECR staff ‘for the ten years of common life journey we make bearing the cross placed on us by our Lord Jesus Christ… Our department is often called ‘the ministry of foreign affairs of the Russian Church, but it would be more correct to call it today ‘the ministry of defense’ of the Russian Orthodox Church, perhaps, a frontier service, for we guard the sacred borders of our Church protecting her by all available means and ways. But our primary defender is the Lord Jesus Christ and it is by the power of the Lord’s cross that we resist the encroachments on our sacred borders, which come from various sides. We are aware that standing behind them is not the will of God and not even the human will, but the will of the devil who wishes to bring division and confusion in the family of Local Orthodox Churches, to undermine and shake our unity. But the evil one will not only fail to do it because the firm and calm stand of solidarity between the Local Orthodox Churches will not let the schism be accomplished and deepened. We believe that with God’s help all these temptations will be overcome’.