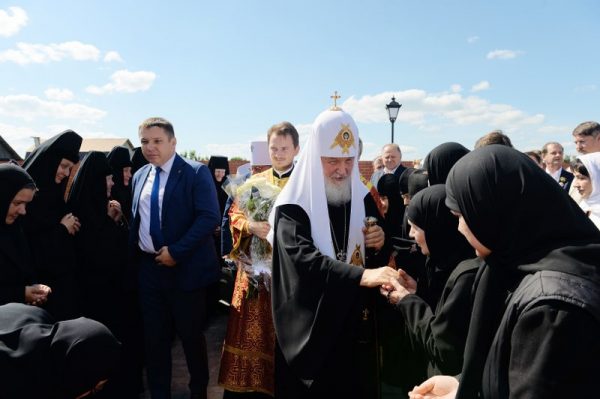 On 15 July 2018, after the Liturgy at the Church of the Theodore Icon of the Mother of God at the Monastery of the New Martyrs and Confessors of the Russian Church in Alapayevsk, Sverdlovsk Region, His Holiness Patriarch Kirill of Moscow and All Russia and the permanent members of the Holy Synod of the Russian Orthodox Church, accompanied by Metropolitan Kirill of Yekaterinburg and Verkhoturye and Bishop Mefody of Kamensk-Uralsky and Alapayevsk, visited the Convent of the Venerable Martyr Grand Duchess Elizabeth in Alapayevsk. The convent was founded in 1998 near the schoolhouse where Grand Duchess Elizabeth and several members of the Romanov House had been held prisoners from 20 May 1918. 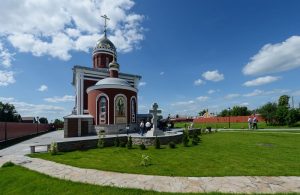 Meeting His Holiness were Hegumenness Smaragda (Zykova), mother superior of the convent, and the sisters.

The Primate of the Russian Orthodox Church performed the rite of lesser consecration of the newly built Church of the Venerable Martyr Elizabeth.

After the service His Holiness Patriarch Kiril delivered a Primatial homily, saying in particular:
“I wholeheartedly wish you, Matushka, and all the sisters to grow in spiritual strength and never neglect the prayer, for the prayer for the monastics is the first and main deed. I also wish you to humbly fulfill your obediences and to do all you can, few as you are, to strengthen the abode. For that, it is necessary to perform good deeds, first of all, to help those girls and mothers who have found themselves in a difficult situation, to help orphans, widows and all those in need of support. The convent should be such a place where people living in the world can come to be healed of their illnesses and sores. I wish you to promote these activities, and then the number of nuns will increase and the Lord will grant all that is necessary for doing this good deed.”

His Holiness presented the newly consecrated church with the ‘It Is Truly Meet’ Icon of the Mother of God.

The worshippers received icons of the Saviour Not-Made-By-Hand with the Patriarchal blessing.

Then His Holiness Patriarch Kirill was shown around a museum opened on the 14th of July in the schoolhouse where Grand Duchess Elizabeth and several other members of the Royal family had been imprisoned. Presented in the museum are the memorabilia associated with the martyrs of Alapayevsk. The exposition tells about the feats of arms and charity work of representatives of the Romanov House, about their fidelity to duty, friendship and vows.

Brought to Alapayevsk on 20 May 1918, in accordance with a special directive from the Ural Council of Deputies, were the following representatives of the Russian Royal House: Grand Duke Sergei, Grand Duchess Elizabeth, Princes Ioann, Konstantin and Igor, and Prince Vladimir Paley. They were held prisoners in a schoolhouse on the outskirts of the town.

At night of 18 July 1918, the captives of Alapayevsk were brought to a deserted mine outside of town and thrown alive down a deep half-flooded mine shaft; hand grenades and burning loose sticks were thrown after them.