Patriarch Kirill: “Royal Passion Bearers from their Golgotha Entrusted Caring for Spiritual Life of People to Us” 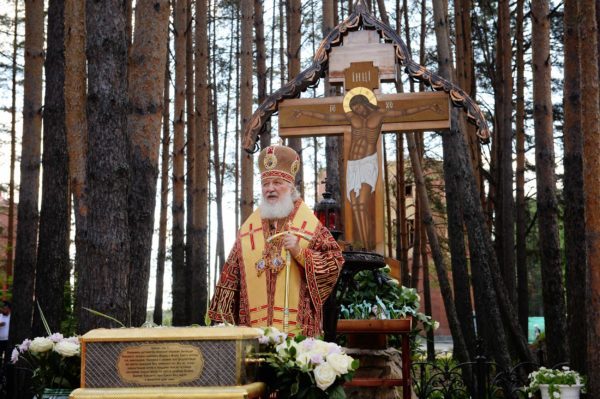 July 16, 2018. Pravmir. His Holiness, Patriarch Kirill of Moscow and All Russia, officiated a Divine Liturgy at the Monastery dedicated to the New Martyrs and Confessors of the Russian Church in Alapaevsk. The monastery was build near the mine where the Holy Martyr Elizabeth Feodorovna and Nun Barbara were killed. At the end of the service, His Holiness, Patriarch Kirill, delivered a sermon:

Your Beatitude! Your Excellence and Your Eminence! Dear fathers, brothers, and sisters!

I congratulate you all on the Lord’s Day! By historical circumstances, we had the opportunity to celebrate a Divine Liturgy here and consecrate the church in honor of the Theodore Icon of the Most Holy Theotokos which is associated with the Romanov dynasty: this church was built next to the site of the death of the Holy Martyr Elizabeth Feodorovna, Nun Barbara, and other representatives of the royal family.

Looking at this place, this nearly buried mine, it is hard to imagine that fear and terror that engulfed the innocent people who were brought to this precipice to be thrown down. And the executioners had no hesitation! But the people in front of them were not criminals, but people who did not violate any law and who did not pose any threat, because they refused all political struggle and any claim to power. The only reason Elizabeth Feodorovna stayed in Russia and did not go abroad where she would live safely with her relatives, is that she could not leave the country that had become her second Motherland. Having established Sts Martha and Mary Convent and having taught many Russians to unite their Orthodox faith with real good deeds, she could not leave the Russian Church which she served faithfully and loyally. Leaving Russia was beyond her strength. There was no politics in it, but only her strong religious feeling and love for the country that had truly become her second Motherland.

Reflecting on this tragedy, I was thinking why did not the executioners shoot St. Elizabeth? It is a terrible execution, but at least it is an instant death… Why did they have to throw this fragile woman, who was wearing a monastic robe, alive in this deep pit? Why did they have to throw the others alive as well? Why did they have to throw grenades without even knowing whether the people will die from them or will stay alive suffering from the wounds? No revolutionary impulse, no desire for social justice, no struggle with the exploiters, nothing that was stated as a reason for the revolution can excuse this insane diabolic malice. However, it is understandable, especially for Christians. The Lord reveals a lot to us through our faith: it is enough to remember Christ the Savior Himself. Why was He crucified? Who was He a threat to? What evil deeds did He do? He did not offend a single man, but healed, raised from sickness, and resurrected… Thousands of people were in awe at His deeds, but the persecutors did not stop: they tortured, beat and crucified the innocent one. I think that after the Calvary sacrifice the understanding of the sacrifice as the atonement of sins has become a very important part of our church tradition. The Lord through the sacrifice of the cross redeemed the sins of the whole human race, because He was both God and Man. But anyone who goes through suffering, being an innocent one, also makes a sacrifice to the Lord. And, probably, he or she does not make this sacrifice for their sins only, being like an undefiled lamb slaughtered by the forces of evil. Such sacrifice was made by the Holy Martyr Elizabeth Feodorovna, who was like a pure lamb slaughtered by those who were engulfed in malice and whose dark and horrible life was incompatible with the light shone by St. Elizabeth and those who died with her.

In today’s Gospel reading (Romans 15:1-7) we find such words by the Holy Apostle Paul, “We through patience might have hope”. In general, the connection between patience and hope is a very powerful thought that the Apostle Paul has in a whole series of his texts. This is no coincidence, because without hope there can be no patience, and without patience there can be no hope. A person is patient because he or she hopes. Even the one sentenced to a terrible illness bears it with patience, because one hopes. And it often happens that hope does not put to shame! As the Venerable Nilus of Sinai said, those who are patient imitate Christ, and it is right. Anyone who is patient being undeservedly offended should not be angry with the whole world, but understand that one should bear the undeserved offense with patience in order to gain hope. According to Apostle Paul, hope “makes not ashamed” (Romans 5:5).

What was the hope of the holy martyr? After all, she was a clever, rational person. She understood that they were thrown into this terrible mine not so that the executioners who tossed grenades there would put up a ladder to save them. She knew that it was the end. Holy Martyr Elizabeth Feodorovna died an agonizing death from hunger and thirst, being undoubtedly wounded, because it is impossible for one to avoid getting hurt from the falling into the mine and from the fragments of the grenades. But St. Elizabeth had hope even though she realized that her hope was not connected with earthly life. Earthly life remained above. She was on her way to another life and believed in it. And her hope did not make her ashamed, because the Holy Martyr Elizabeth was still strong enough to tear off her monastic clothing in order to bandage the wounds of those who suffered with her in this terrible mine.

I would like to heartily thank those who worked hard to create this monastery. I had the opportunity to visit this place earlier, but seeing it now, I almost did not recognize anything: everything changed so much over the years. I thank the Very Rev. Vikenty who put a lot of effort here. I thank the Very Rev. Kirill who worked hard to multiply the glory of these holy places of the Yekaterinburg land. And I thank everyone who contributed, who put effort in order that the memory of the Holy Martyr Elizabeth, Nun Barbara and the others who were murdered here, on this land, would be preserved in our people and our grateful memory.

Through the prayers of the Holy Royal Passion Bearers, the Martyrs Elizabeth and Nun Barbara, and the others murdered here, may the Lord preserve the Russian land and keep the Orthodox faith in our hearts, which gives us hope, and this hope does not put us to shame. Therefore, we believe in the further revival of our people, our Church, in the strengthening of the spiritual life of people, without which there cannot be true human happiness. Full of this hope, let us serve to achieve this goal with double strength. Our Church has this goal, because we are heirs of the holy new martyrs and confessors of the Russian Orthodox Church. From their Golgotha, they entrusted us with caring for our people, their salvation, and their spiritual life. Having visited almost every corner of the Russian land, looking at all of you and at the revival of spiritual life of people, I realize that we are at the very crucial historical stage, which the restoration of our Motherland will inevitably be connected with. Amen.