Source: Interfax-Religion
Natalya Mihailova | 25 September 2014
Moscow, September 25, Interfax - Patriarch Kirill of Moscow and All Russia rejected accusations of being a vehicle of the Kremlin's policy. 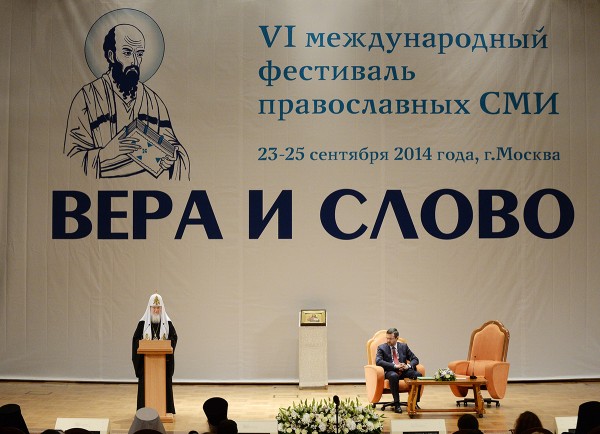 “In some countries, – and the current situation in Ukraine exacerbates this issue, – the person of the patriarch of Moscow and all Russia is linked to the Russian Federation alone and his principles are equated with the policy of the Russian government,” Kirill said at a meeting in Moscow with participants in the Faith and World festival of Orthodox media.

No statements by the patriarch or the church are cited in leveling such accusations at him, he said.

“This is done indiscriminately, especially in Ukraine today by members of, to put it mildly, non-canonical Orthodox entities. They just indiscriminately represent the patriarch as part of the state – he is a vehicle [of state policy], and so he mustn’t be let in, and so he is all the bad things, and so forth,” Patriarch Kirill said.

He said he was responsible for Moscow Patriarchate-governed Orthodox communities in all countries where they exist, and not only in Russia.

“The Patriarchate is not an entity within one specific country, it is not a church entity that covers one specific ethnos. It means canonical jurisdiction over part of the world,” the patriarch said.

He added that none of these communities has privileges over others.

“They are all parts of his flock, and this puts certain restrictions on the patriarch, it makes the patriarch take account of the interests of all Orthodox people who are under his jurisdiction,” he said.