Source: Interfax-religion
Natalya Mihailova | 29 October 2016
Moscow, October 28, Interfax - Patriarch Kirill of Moscow and All Russia and the leaders of Russian Jews have agreed to join their efforts to oppose religious extremism in the Middle East. 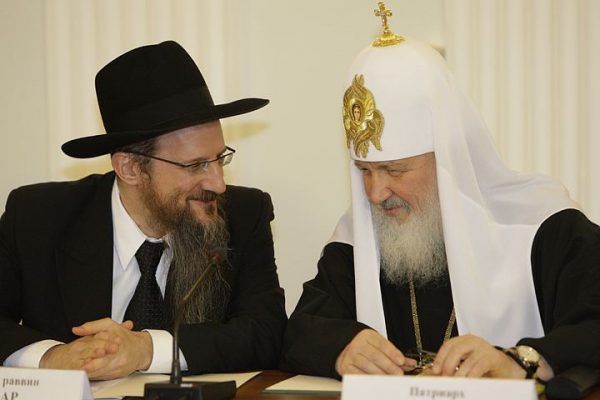 After his meeting with Patriarch Kirill in Moscow on Friday, Chief Rabbi Berel Lazar drew the attention of Jewish community representatives to Russia’s peacekeeping role in the Middle East and called for joint efforts to fight religious extremism that threatens Christian communities in the region, the chief rabbi’s spokesperson told Interfax-Religion.

“For his part, Rabbi Lazar stressed that this problem is universal and urgent not only for the Middle Eastern Christian communities but also for the State of Israel,” the spokesperson for the Federation of Jewish Communities of Russia (FJCR) said.

For his part, FJCR President Alexander Boroda, who also attended the meeting with the patriarch, called modern-day Russia an example of a state where all religious communities are in warm good-neighborly relations.

“I hope that by our example and our experience we will be able to help establish a similar dialogue also in other countries where this is necessary,” Boroda said.

He then told the patriarch about new projects of the Jewish Museum and Tolerance Center the FJCR opened a few years ago.

The meeting also focused on the prospect of holding in Russia an international forum of world religions, with participation by spiritual leaders of the largest religious organizations.

The event could solve two problems: that of “encouraging cooperation among religious leaders in opposing the dangerous challenges of the past few years, and helping advance Russia’s global positive image as a state that protects the rights of believers and builds its policy around eternal values,” Lazar said.

It was decided to consider this initiative in more detail at the next meeting of the Russian Inter-Religious Council, where, as Patriarch Kirill noted, the Russian Church and the FJCR have long been holding active dialogue and making joint decisions “on the basis of Biblical moral ideals” and working through the issues shared by all mainstream religions.

“In this sense, we do have a united working front,” the patriarch was quoted by the FJCR spokesperson as saying.

The meeting attendees also considered the issue of fighting anti-Semitism and raised problems posed to believers by Western liberalism. “The parties were unanimous that it is unacceptable to remain indifferent to the substitution of spiritual values by the ideology of permissiveness and that the mainstream religions should articulate their position on this issue,” the FJCR spokesperson said.

The Jewish community very much appreciates the patriarch’s wise and balanced approach to inter-religious dialogue issues and for its part is doing all it can for believers to be understanding of, and warm towards one another, the chief rabbi said.