Source: DECR
Natalya Mihailova | 11 March 2017
On March 10, 2017, His Holiness Patriarch Kirill of Moscow and All Russia met with Colombia’s Ambassador to Russia H. E. Alfonso Lopez Caballero, at the Patriarchal residence in the St. Daniel Monastery. 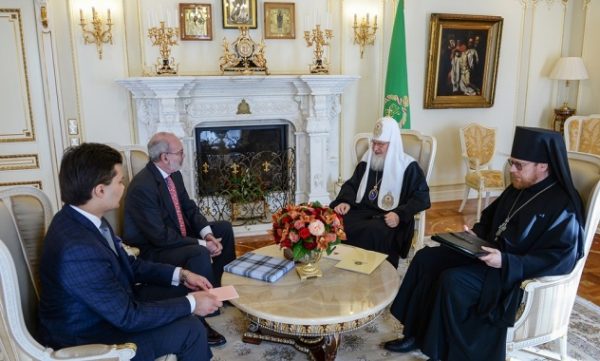 The meeting was attended by Archimandrite Philaret (Bulekov), vice-chairman of the Moscow Patriarchate department for external church relations (DECR), and Miguel Palacio, DECR secretariat for the far abroad.

The Primate of the Russian Orthodox Church warmly welcomed the ambassador, noting in particular that as far back as the early 19th century the events in that country – the struggle for independence, declaration of Great Colombia, activities of Simon Bolivar and others – provoked genuine interest and great sympathy in the Russian society.

‘Speaking about the modern times, I consider the cultural relations existing between our two countries to be very important. I believe it would be desirable to develop them’, His Holiness said.

He cited the exchange of exhibitions in the early 2000s, when a collection of 30 canvases painted by Gregorio Vasquez Ceballos (1638-1711) on religious subjects was presented at the Church of Christ the Saviour in Moscow, while an exhibition of Russian icons from the Tretyakov Gallery collection took place in Colombia. Such contacts, His Holiness said, arouse mutual interests and sympathy.

Patriarch Kirill also shared some memories of his visit to Colombia in 2008, when he occupied the post of chairman of the Moscow Patriarch department for external church relations.

‘At that time I met for the first time with the Russian community in Bogota and celebrated the Liturgy at the Russian trade representation’, he related, ‘Then it was decided to establish a parish of the Moscow Patriarchate; a warden was elected; and in 2009 the parish was registered. At present, there are two Orthodox parishes in Colombia, in Bogota and Cali.’

As His Holiness noted, the parishes in Colombia consist of Russian-speaking compatriots as well as Orthodox Colombians. The community in Cali is served by a Moscow Patriarchate priest, Hieromonk Alexander (Rosas), a Colombian by origin, who received pastoral training in the Russian Orthodox seminary in Paris.

‘I stayed on Colombia for only three days, but I managed to see something, and the country made a great impression on me’, Patriarch Kirill said, ‘especially delightful for me were meetings there with Orthodox people and the organization of the parish’.

Speaking about the internal and social situation in that country, His Holiness stressed the importance of the continued process of reconciliation between the official authorities and the armed opposition.

‘I believe the progress made is important not only for Colombia, but also other countries, as an example of how such complex problems can be resolved’, His Holiness stated.

He wished success to the present political leadership of Colombia and all the Colombian people on their way to national reconciliation.

On his part, Ambassador Caballero greeted the patriarch and thanked him stressing the importance of the meeting. In response to the high guest’s request, Patriarch Kirill highlighted some aspects of the Moscow Patriarchate’s relations with Latin American countries.