Source: DECR
Natalya Mihailova | 29 September 2016
On September 26, 2016, His Holiness Patriarch Kirill of Moscow and All Russia met with participants in the 10th session of the Joint Russian-Iranian Commission for Dialogue ‘Orthodoxy-Islam’, at the patriarchal residence in Chisty Pereulok in Moscow. 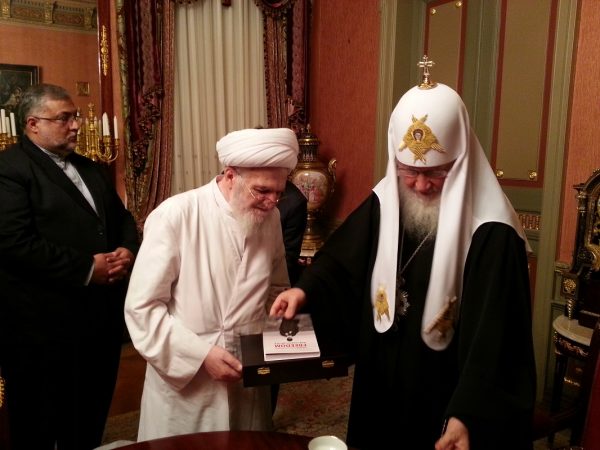 The 10th session of the Joint Commission is held on September 26-27, in Moscow. Patriarch Kirill has sent a message of greetings to the participants in the session.

Participating in the meeting in Chisty Pereulok were, from the Iranian side, Ayatollah Mohammad Ali Taskhiri, Councellor of The Supreme Leader of Iran, Dr. Abouzar Ibrahimi Torkaman, head of Iran’s Islamic Culture and Relations Organization, and Mr. Mehdi Sanai, Iranian ambassador to Russia.

Present at the meeting were Metropolitan Feofan of Kazan and Tatarstan, head of the Russian Orthodox Church delegation to the 10th session of the Joint Commission, and Rev. Dimitry Safonov, secretary for interreligious relations, Moscow Patriarchate’s department for external church relations.

Welcoming Ayatollah Mohammad Ali Taskhiri, Patriarch Kirill remarked that his first meeting with the guest took place about twenty years ago in Tehran.

‘Then we formulated the idea of the need to have a standing body for dialogue between the Russian Orthodox Church and Iranian Muslims’, His Holiness recalled. 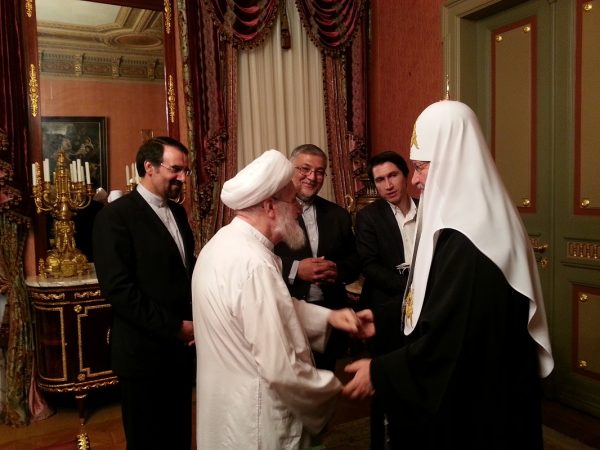 His Holiness gave a high value to the work of the Joint Russian-Iranian Commission for Dialogue ‘Orthodoxy-Islam’, which has identified a similarity in the understanding of many problems of today.

‘I am glad that this initiative, which we formulated together with you, dear brother Taskhiri, has led to such good consequences. The working group we set up for dialogue between the Russian Orthodox Church and Muslims in Iran has proved that it is interreligious dialogue that helps peoples to understand each other and to achieve unanimity on very important problems to today. I believe it is important that in the framework of our Commission we have together opposed challenges coming from the aggressive secular world, aimed, among other things, at the moral traditions of our religions. On the basis of our faiths, we have exchanged for twenty years our thoughts about key problems of today’s world. And the dialogue has shown that we have many things in common’.

Addressing Dr. Abouzar Ibrahimi Torkaman, Patriarch Kirill reminded him of the meeting with the participants in the 8th session of the Joint Commission, which took place in 2012:

‘Four years ago, too, you were present at the meeting with me. At that time you were head of the Iranian embassy cultural representation in Russia. I would like to say that we very positively assess the high level of relations established between the Russian Orthodox Church and your Islamic Culture and Relations Organization. Your organization is maintaining interreligious dialogue with representatives of religious communities in many countries of the world’.

His Holiness stressed that he attached a great importance to the development of dialogue between religious communities which have many things in common in their view of the place of the human being in the world, the nature of human morality and relations between people.

‘I think that both the Iran’s Islamic Culture and Relations Organization and the Russian Church seek and, by God’s mercy, find such partners for dialogue with whom it is interesting to discuss these issues, and, which is the most important thing, the results of discussion with such partners constitute a real contribution to overcoming the complicated problems existing in the life of today’s society’, Patriarch Kirill stated.

According to His Holiness, the current session of the Joint Commission for interreligious dialogue will contribute to the achievement of a lasting and just peace.

‘Peacemaking service is a practical result of our work. It is very important that the world should know that both the Orthodox and the Muslims seek peace with justice. The common aspiration for a just peace is based, among other things, on our faith’, Patriarch Kirill said in conclusion, expressing hope that the work of the Joint Commission ‘will contribute to the strengthening of relations between our religions and to the development of relations between the peoples of Russia and Iran’.

On their part, the guests expressed cordial gratitude to His Holiness for the welcome and his invariable attention to the interreligious dialogue and Russian-Iranian cooperation.

In the course of further conversation, the sides discussed the work of the Joint Russian-Iranian Commission for Dialogue and plans for further cooperation.

Most viewed articles
Faith and Moral Freedom78
Patriarch Kirill: “The Memory of the New Martyrs will Help Us to Be Faithful to Christ amid Modern Temptations”72
Bishop Nicholas of Manhattan visits Holy Cross Monastery in West Virginia60
Lord, Save Me!58
Patronal Feast Celebrated in St. Anna Convent in Vashkivtsi40
Condolences of Patriarch Kirill over the death of believers in the fire that broke out in Abu-Seifein Church in Cairo32
The Trap of Religiosity25
Most popular authors
Pravmir.com team204
Archpriest Michael Gillis77
Fr. Theodore Stylianopoulos58
Vasileios Stoyiannos24