Source: DECR
Natalya Mihailova | 25 November 2014
November 21, 2014 – His Holiness Patriarch Kirill of Moscow and All Russia met with the new Ambassador Extraordinary and Plenipotentiary of the USA to Russia, Mr. John F. Tefft. Among those present was the ambassador’s wife, Ms Mariella Cellitti Tefft, and the Deputy Minister Counsellor for Political Affairs of the US Embassy, Ms Andrea Brouillette-Rodriguez. 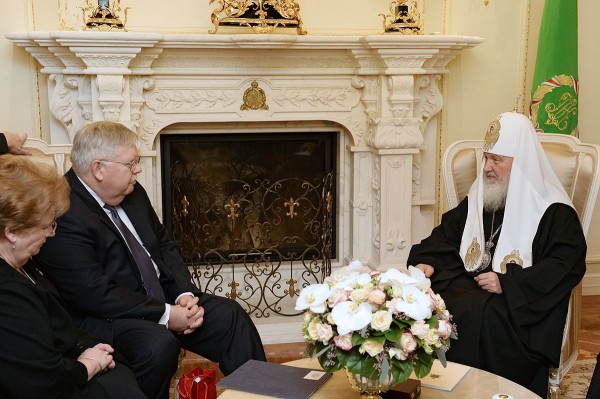 Participating in the meeting was also Archimandrite Philaret (Bulekov), a vice-chairman of the Moscow Patriarchate department for external church relations.

His Holiness Kirill welcomed the head of the US diplomatic representation in the Russian Federation, who presented his credentials to the President of the Russian Federation on November 19, saying, “From this moment you begin your official stay in Russia. You represent a country with which Russia is tied by many bonds including historical ones’.

The Primate of the Russian Church made a special mention of the importance of the Orthodox factor in the history of relations between the two countries, recalling in particular that the first Orthodox Christians appeared in the west of the United States, in Alaska, as far back as the time when it was part of the Russian Empire. It was a mission of monks from the Valamo Monastery. “From Ladoga Lake to the remote Kurils and the shores of Alaska did the Russian Orthodox mission spread at that time. It made a beginning of the development of Orthodox life in the United States to spread first through California and then to the eastern cost”, he said.

Patriarch Kirill noted that the history of Orthodox in America is associated with the names of such great people as St. Innocent (Veniaminov), who was a missionary among the Aleutians and the small peoples of the North and the Far East, and St. Tikhon, Patriarch of All Russia, who used to be a bishop in New York. “The Russian Church was directly involved in the pastoral work in the American continent. It brought her in contact with Protestant churches in the United State so close that when Alaska became part of the United States, the Synod in Petersburg received an official letter from the Episcopal Church in the USA requesting to organize joint pastoral work with people in Alaska. The official response to that letter stated the need to develop dialogue, including theological, in order to bring the theological attitudes closer together so that such work could be possible”, he said.

In the course of the talk, the Primate of the Russian Orthodox Church spoke about the dialogue and joint actions with Christians and cooperation with other religious leaders in the USA even in the years of the Cold War. “We managed to do much. At the most difficult times when there were great risks of confrontation between our two countries, Christians proved to be capable of working together and making joint statements”.

He expressed the conviction that now, too, when relations between Russia and the USA are going through not the best period, “it is necessary to work, also for religious leaders, so that the two powers may develop their relations, treat each other with mutual respect and confidence and participate in the great task required of us by multiple crises which have gripped the modern civilization”.

Mr. John F. Tefft, on his part, underlined that for him it was a great honour to have an opportunity for meeting with His Holiness Patriarch Kirill of Moscow and All Russia. He congratulated the Primate of the Russian Orthodox Church on his recent birthday.

He told His Holiness about his visit to the Orthodox church in the city of Junaux in Alaska.

The ambassador stressed that he was looking forward to an opportunity to meet with the Primate of the Orthodox Church in America, His Beatitude Metropolitan Tikhon of All America and Canada, who will come on an official visit to the Russian Orthodox Church in the beginning of December.

The both sides expressed concern and anxiety over the situation of Christians and other religious minorities in the Middle East and pointed to the need for consolidated efforts of Russia and the USA and their peoples in the struggle against extremism and terrorism.

In conclusion of the meeting, the participants exchanged tokens.

Most viewed articles
Number of Christians Murdered for Faith Rose 60 Percent in 2020: 50 Most Dangerous Countries to Be a Christian222
God Is With Us… And Nothing Else Matters132
A Little Light and the Darkness Will Become Heaven97
I Have Fought the Good Fight, I Have Completed the Race68
Churches to Reopen in Greece on January 1867
Metropolitan Hilarion: Actions of Extremists Caused Serious Imbalance in the Centuries-old Christian-Islam Relations in Syria50
Another Cleric of the Ukrainian Orthodox Church Attacked in Zaporozhie34
The Light of Epiphany19
Most popular authors
Charlene Aaron222
Pravmir.com team151
Fr. Gabriel Bilas132
Protopresbyter Themistoklis Mourtzanos97
Metropolitan Hilarion (Alfeyev)68
Priest Luke A. Veronis19