Source: DECR
Natalya Mihailova | 03 September 2014
On September 2, 2014, His Holiness Patriarch Kirill of Moscow and All Russia met with the Primate of the Evangelical Lutheran Church of Finland, Archbishop Kari Mäkinenn of Turku and Finland. The meeting took place at the Patriarchal and Synodal residence at the St. Daniel Monastery, Moscow. 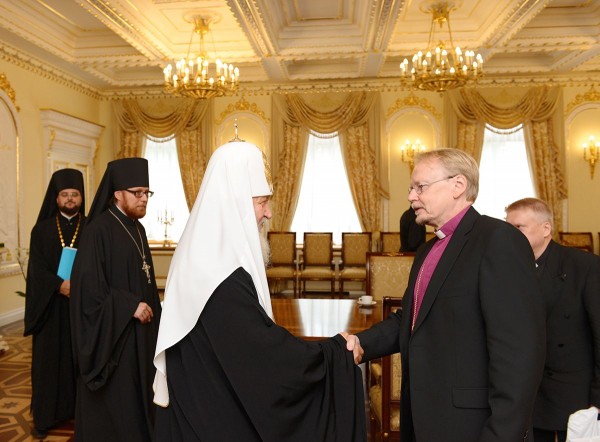 Patriarch Kirill warmly welcomed Archbishop Mäkinenn and his delegation, stressing that the bilateral theological dialogue, which began between the Russian Orthodox Church and the Evangelical Lutheran Church of Finland in 1970, was of great importance for both the development of Orthodox-Protestant contacts and the consolidation of friendly relations between the two countries.

Archbishop Mäkinenn, on his part, said that he was very glad to meet with Patriarch Kirill and to discuss with him prospects for the development of relations between the two Churches. “I feel a successor to the great tradition initiated under my predecessor Jukka Paarma. Thanks to the long theological conversations, we could come to a better knowledge of both your and our own Church”, he said.

They also discussed further development of the bilateral cooperation. It was noted that in the present situation the most urgent are common efforts for defending Christians in the Middle East and North Africa and other regions in which believers in Christ are subjected to oppression.