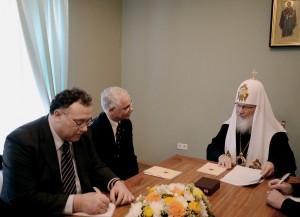 On April 14, 2013, after the Divine Liturgy of St. Basil the Great His Holiness Patriarch Kirill of Moscow and All Russia celebrated at the Church of Our Lady of Kazan at the Convent of the Nativity of the Mother of God, he met with Hungary’s Minister for Social Resources Zoltan Balog.

Patriarch Kirill noted with satisfaction that the Hungarian leaders made a stand for the Christian roots of the Hungarian culture, saying, ‘We welcome the fact that the Constitution of Hungary now includes a statement that it is the God of Christianity who unites the Hungarian people, and we also welcome the stand taken by the Hungarian Government – certainly supported by the people – with regard to the nature of marriage as union of man and woman. It is a difficult task to defend Christian beliefs in Europe today, but I am sure there will be no Europe without it’.

He reminded his guest of the sad experience of the Soviet time when the people were torn away from their religious and cultural roots. ‘We have become witnesses to colossal spiritual and moral problems of society, which we have to overcome with difficulty today. Building on that experience, we call upon people: do not repeat such things! It does not matter in what way you reject Christian roots – through Soviet ideology or the idea of extreme secularism. What matters is the outcome. We are very well aware of it today in Russia, Belarus and Ukraine and in other countries under pastoral care of the Russian Orthodox Church. At the same time, we as proponents of human freedoms, rights and dignity because of our Christian beliefs declare that all these values can exist only if they are combined with personal moral responsibility. Without moral responsibility these values disintegrate’, he said.

He also said that at present a great number of Russia-speaking compatriots – Russians, Ukrainians, Byelorussians, Moldovans and others – live in the territory of Hungary. He thanked the leaders of that country for the conditions in which the ROC Diocese of Hungary and Budapest lives and takes pastoral care of these people. He also noted with gratitude that as a result of appropriate decisions made by the Hungarian justice, Russian-speaking compatriots have an opportunity to worship in a cathedral of their own.

Patriarch Kirill told Mr. Balog about relations with the Catholic Church in Hungary. ‘Some time ago, Cardinal Erde and I thought about the need to establish a European forum for discussing the topical problems of the time. Now this platform does work, and we believe it represents a good experience of dialogue between the Orthodox and the Catholics’, he said.

His Holiness made a special mention of the traditionally good relations with the Reformed Church in Hungary, saying, ‘These relations were especially strong when we all needed mutual support and solidarity under the reign of atheistic ideology. At that time our joint work helped each of our communities to preserve its identity’.

Mr. Zoltan Balog, on his part, thanked the Primate of the Russian Orthodox Church for the kind words about the Hungarian people and their leaders. He conveyed to His Holiness best regards from Hungary’s Prime Minister Victor Orban.

He said that the experience gained by Russia and Hungary at the time of atheism should not be forgotten, ‘because the Church defeated the ideological, theoretical atheism but the practical atheism it very difficult to overcome. We have learnt how to preserve the faith in a situation of ideological struggle’, he said, adding that today’s Europe stood in the strong need of such experience.

‘We take with gratitude the support and prayer we receive from the Russian Orthodox Church and you personally. I am very glad that the traditionally positive history of our relations has been strengthened’, Mr. Balog said.

The Hungarian minister, who had been a pastor of the Reformed Church before he entered the civil service, also emphasized the importance of inter-Christian cooperation in the task to advocate Christian values and to defend the persecuted Christians.

During the common meal that preceded the meeting, Patriarch Kirill welcomed Mr. Balog, saying, ‘The Christian people of Hungary has managed in today’s Europe to defend their right to include in their Constitution a clear reference to the fact the God and Christianity are the spiritual and cultural basis of the nation and rejected all the sinful temptations concerning the legalization of same-sex-marriages’.

‘At a certain moment, we always have to confront the dilemma to be with God or against God’, His Holiness said reminding that any attempt to build a prosperous society with justice without God is doomed to fail. ‘We had that experience and we can testify to Europeans who are unaware that one should hold on with both hands to one’s religious and cultural basis, God and Christianity’, His Holiness Kirill emphasized.

Photos by the Patriarchal Press Service