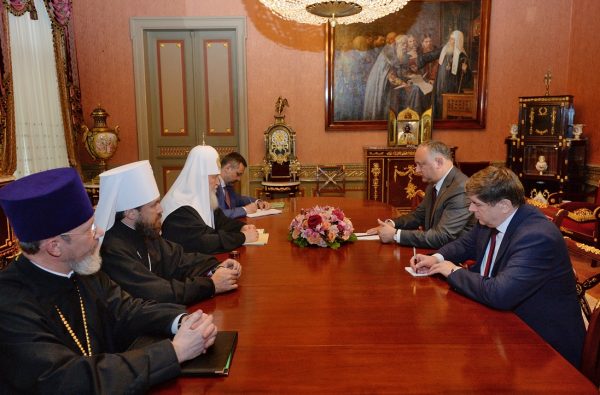 On June 13, 2018, His Holiness Patriarch Kirill of Moscow and All Russia met with President of the Republic of Moldova Igor Dodon, at the patriarchal working residence in Chistyj Pereulok.

Participating in the meeting from the Moldovan side was Moldova’s Ambassador to Russia Andrey Negutsa; from the Russian Orthodox Church there were Metropolitan Hilarion, chairman of the Moscow Patriarchate department for external church relations (DECR); Archpriest Nikolay Balashov, DECR vice-chairman; and V. Legoida, head of the synodal department for the Church’s relations with society and mass media.

‘I am very glad to see you! Whenever we meet, we have many issues to discuss. You know that Moldova is dear to my heart and everything that happens in the country and the Church meets with a living response in my heart’, His Holiness said welcoming Mr. Dodon.

The Primate of the Russian Orthodox Church expressed wishes of prosperity to the president and all the Moldovan people.

‘God grant that, despite the difficult situation linked with the current political agenda in Moldova, the social situation has been improving, just as people’s spiritual condition, which worries me most of all’, His Holiness added.

‘On behalf of our Moldovan Orthodox people, I would like to convey to you the best wishes and greet you and the Russian people in your person on the occasion of yesterday’s national holiday – the Day of Russia’, Mr. Dodon said.

‘In Moldova, as you know, 98% of the people are Orthodox. And despite all the hardships at various stages of history, the faith and spirituality has been preserved in their souls. This makes us stronger, and we are confident that all the problems will be solved’, the president said.

In the course of the further talk, the Primate of the Russian Orthodox Church and the President of Moldova discussed problems involved in church life in the republic.