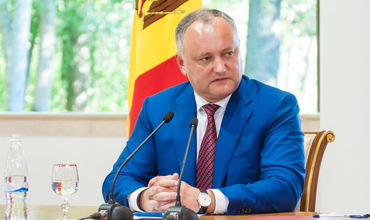 Chisinau, August 2, Interfax – Moldovan President Igor Dodon has suggested that Patriarch Kirill of Moscow and All Russia should visit the Gagauz autonomous region and the city of Balti during his upcoming visit to Moldova.

Dodon wrote on his Facebook page on Thursday that he had discussed this possibility with Metropolitan Vladimir of Chisinau and All Moldova.

According to Dodon, he and Metropolitan Vladimir “discussed organizational steps as part of hosting the World Congress of Families, and also the upcoming visit by Patriarch Kirill of Moscow and All Russia, who is expected to come to Moldova within the next few months.”

“I suggested that Patriarch Kirill visit the city of Comrat [the administrative center of the Gagauz autonomous region in southern Moldova] and also the city of Balti [Moldova’s second largest city, located in the northern part of the country] for the first time,” the president said.

Patriarch Kirill will attend the World Congress of Families, which will be held in Chisinau on September 13-16 under the aegis of the Moldovan president, Dodon said. The forum is expected to involve around 2,000 people, including known experts, political figures, and public opinion leaders from more than 50 countries.

Patriarch Kirill has already visited Moldova twice in his capacity as head of the Russian Orthodox Church – in October 2011 and September 2013. He also travelled to the Transdniestrian region during his last visit.

Most viewed articles
Seven Lessons for the New Year from St. Seraphim of Sarov237
A Great Time to Join the Orthodox Church173
New Jersey Governor Signs Bill Legalizing Abortion Up To Moment of Birth105
The Way of Christ Is The Way of Love71
Metropolitan Hilarion Celebrates the 20th Anniversary of His Episcopal Consecration58
Brooklyn Street Co-Named for Antiochian Pastor Who Served a Half Century There43
Metropolitan Hilarion: the Church and traditional confessions have done everything possible to improve the situation in Kazakhstan40
Sunday of the Samaritan Woman1
How We Worship: the Struggle of the American Experience1
4-400×6001
Most popular authors
Priest Luke A. Veronis237
Frederica Matthewes-Green173
Ryan Foley105
Pravmir.com team98
Fr. Theodore Stylianopoulos71
Peter Samore43