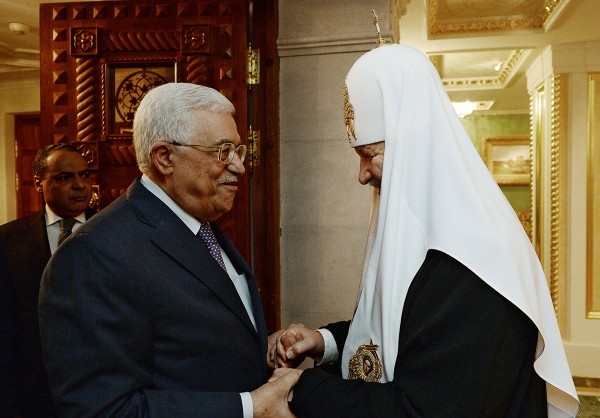 Welcoming Mr. Mahmoud Abbas, Patriarch Kirill said, ‘I am delighted to see you. Whenever you come to Moscow, we have a wonderful opportunity to meet with you and your colleagues and to discuss matters important for both the Palestinian state and the Russian Orthodox Church’.

The president of the state of Palestine came to Moscow for the opening of the cathedral mosque after a large-scale reconstruction. ‘I would like to congratulate you and all of us on this remarkable event’, His Holiness noted, ‘You must have felt what good and wonderful relations have been established between Orthodox people and Muslims in Russia. We are glad that this large mosque has been built in Moscow at last. It will become a place for prayer for many Muslims who live here or come to visit Moscow’.

‘Many Muslims come to Russia nowadays from republics of the former Soviet Union, as it is sometimes the only source of a good earning for them’, Patriarch Kirill said noting that unlike the West, Russia accepts a greater number of migrants by an order of magnitude, but nobody in the world is aware of it. ‘And there is no hysteric whatsoever, no police, no gases, not physical clashes’. He said that the problems arising with arrivals are settled in the legal field.

‘The most important thing however’, he continued, ‘is that the good Orthodox-Muslim relations create an atmosphere for both Muslims to live calmly here and for the Orthodox to treat Muslims with respect, tolerance and brotherly feelings. Therefore, when we say that Russia is a unique country in which there are no inter-ethnic conflicts, we speak the truth. But we also understand that to a considerable extent these peaceful good relations prevail because radical Islam, by God’s mercy, does not extend to the territory of Russia’.

The events taking place today in the Middle East, including the actions of ISIS and other radical groupings constitute a great danger for the whole world, Patriarch Kirill stated. These groupings seek to recruit Russian citizens who confess Islam. ‘For this reason, the events taking place today in such countries as Syria, Iraq, Libya and others are a matter of our immediate concern’.

Patriarch Kirill congratulated President Abbas on the fact that during the UN General Assembly, which is to open shortly, the Palestinian flag will be raised for the first time. ‘We share the decision of the Holy See to recognize the Palestinian State and support this decision’, he said.

His Holiness also expressed hope for further consolidation of the Palestinian people, implementation of the peace policy of the State of Palestine towards its neighbours and its active participation in overcoming the chronic Palestinian crisis. ‘It is our profound conviction that there can be no alternative whatsoever to the peaceful development of events in the Middle East. The alternative is chaos and mutual destruction; it has a dangerous impact on the whole system of international relations’, he stressed, wishing President Abbas God’s help in his efforts.

Having thanked Patriarch Kirill, President Abbas said, ‘I am glad to be again here with you. We feel at home with friends who, together with us, believe in the peaceful co-existence of various nations and people of various religions’.

Speaking about the solemn opening of the cathedral mosque in Moscow, which Russian President Putin attended, he described this event as a serious testimony to the atmosphere of tolerance, to the peaceful existence of various religions and peoples in the country. ‘We very much hope that all the nations of the world will follow Russia with regard to peaceful co-existence, and peace will prevail between people of all religions’, he said.

Speaking about Palestine, President Abbas also touched upon interreligious relations: ‘It is a country of three religions. The people of these religions need to live in peace’.