Source: DECR
Natalya Mihailova | 15 April 2015
April 13, 2015 – His Holiness Patriarch Kirill of Moscow and All Russia met with the President of the State of Palestine Mahmoud Abbas. 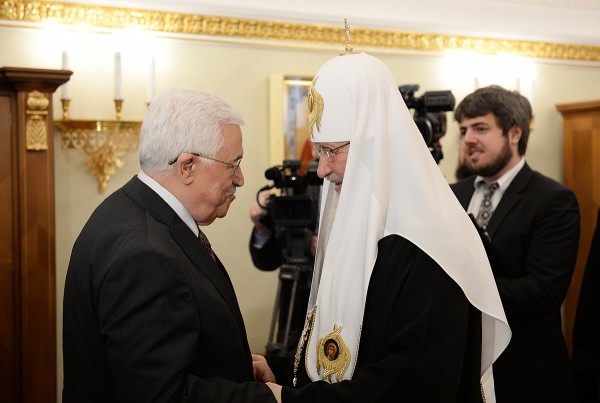 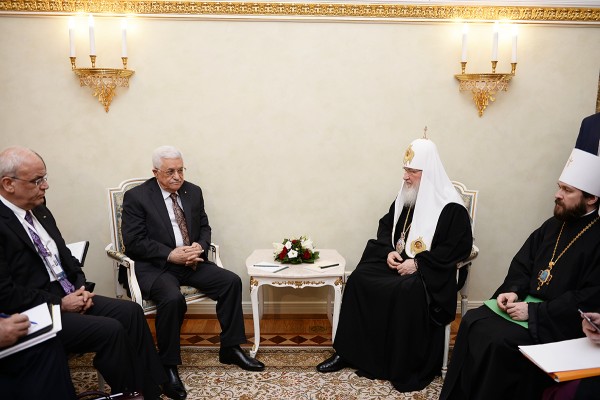 The Primate of the Russian Orthodox Church welcomed the guest, noting that he was delighted to meet Mr. Abbas whenever he came to Moscow or during his visits to the Holy Land.

‘From your experience you are aware of our people’s attitude to Palestine and its struggle for statehood and independence. The Russian Orthodox Church, to which most of our people belong, also supports the lawful demands and aspirations of the Palestinian people in their desire to gain its statehood in accordance with the historic resolution of the United Nations.

‘We have always taken close to heart the bloody conflicts arising in the Holy Land. Many, perhaps even most of our people felt keenly the suffering of Palestinians during Israel’s military operation in Gaza. We prayed for unfortunate civilians who were killed at that time’, he said reminding that over two thousand people fell victim to that operation. 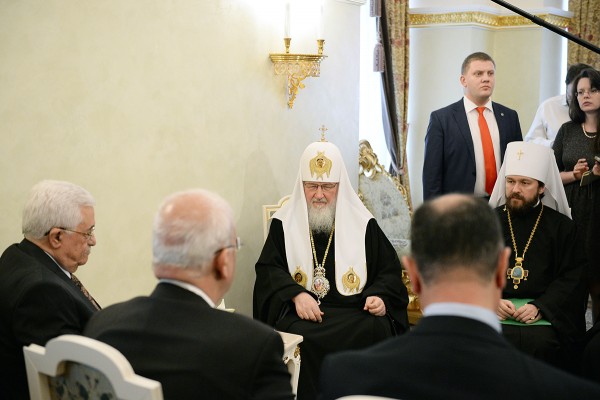 His Holiness said that the Russian Orthodox Church is strongly against terrorism. ‘The solution of the Palestinian problem cannot be achieved through terrorist actions’. He welcomed Mr. Abbas’s and his administration’s efforts to achieve broad diplomatic recognition of the State of Palestine and to involve the UN Security Council in this process. ‘It is the right way’, he stated, ‘I congratulate you on the progress you have made on this path’.

Patriarch Kirill noted that Mr. Abbas had repeatedly come to Russia to meet with the country’s leaders and the supreme authorities of the Russian Orthodox Church. The established good relations, also on the personal level, are a factor contributing to the development of cooperation with Palestine, he stated.

‘It is not a cottonwool situation that you have to work in. Few statesmen can say, as you do, that most of his work is carried out in a context of the gravest political crisis, sometimes tinged with violence and military actions. You love your people, and it means that all the crises including armed conflicts turn into great stress for you as a person. In spite of this, you have preserved amazing physical and intellectual fortitude and celebrate your 80th birthday going strong as a statesman, thus setting a vivid example for many state leaders of today’. 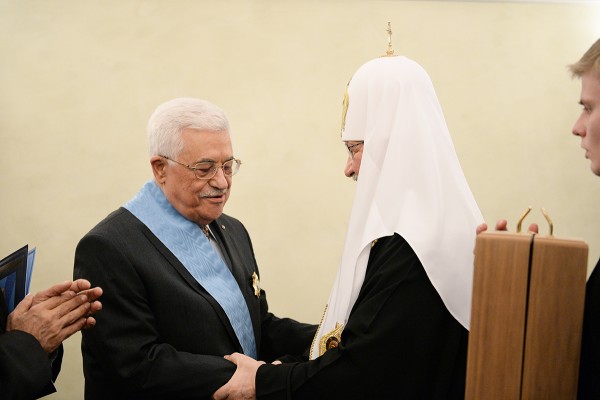 Patriarch Kirill presented his guest with the Order of Glory and Honour in recognition of his contribution to the development of relations between the State of Palestine and the Russian Orthodox Church and on the occasion of his 80th birthday.

Speaking in response, the President of the State of Palestine said that it was a great honour for him to receive such a significant award from so distinguished and old a Church. ‘We do all that is possible to continue strengthening our relations with Orthodox brothers, including in the Russian Orthodox Church’. Mr. Abbas also stressed the importance of further efforts for the establishment of peace in the Middle East.

‘We are very grateful for the support that we receive from Russia, its state leaders and people, and from the Russian Orthodox Church’, he said, noting that people in Palestine cherish the memory of Patriarch Kirill’s visit to the Holy Land. ‘We always seek to meet with you and will always welcome you to the Holy Land’.

Speaking about the Easter celebrations, Mr. Abbas said, ‘I can assure you that we all celebrate Easter, including in Jerusalem and Ramallah. I am very pleased to say that Muslims celebrate this feast together with Christians, like real brothers. We consider all our Christian citizens of Palestine to be our brothers and use peaceful means to struggle for peace in the Middle East’.

The two sides considered the situation in the Middle East, particularly, the situation of Christians in several countries of the region who suffer from the actions of extremist groups. They also touched upon problems involved in the work of the Russian Ecclesiastical Mission in Jerusalem.

Most viewed articles
Patriarch Kirill: Not Only People, But Churches Too, Can Depart from God222
A Christianity of the Catacombs183
The Truth About Riches116
Thoughts on Theophany and Revelation101
Archbishop Makarios of Australia: ” the Great privilege of the Orthodox Church is that we live in communion”69
Metropolitan Onuphry Speaks on How to Protect One’s Soul From Sin55
Most millennials, Gen Z adults support bans on abortions when baby’s heartbeat is detected: poll30
The Muskox Response To COVID-198
How to live the Spiritual Life (Part I)1
Most popular authors
Pravmir.com team376
Archpriest Lawrence Farley183
Fr. Gabriel Bilas116
Elissa Bjeletich101
Archpriest Michael Gillis8