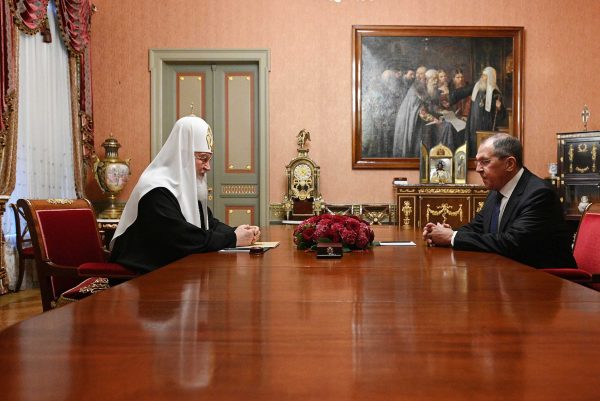 On April 12, 2019, His Holiness Patriarch Kirill of Moscow and All Russia met with the Russian Federation Foreign Minister Sergey Lavrov, at the patriarchal working residence in Chisty Pereulok.

The Primate of the Russian Orthodox Church pointed to the high level of cooperation between the Moscow Patriarchate department for external church relations and the Ministry of Foreign Affairs. ‘Today the Church shows a fairly active presence in the sphere of international relations. For us, it is very useful to know your point of view on problems that disturb us. Therefore, I thank you for this opportunity for meeting and discussing the issues which really are of mutual concern’, he said.

Mr. Lavrov thanked His Holiness for the invitation and underscored the importance of cooperation between the Church and the Russian MFA, especially at the present time ‘when Orthodoxy – not only the Russian Orthodox Church but also the world Orthodoxy as a whole – are subjected to attacks’.

‘The gross interference of western states and our Ukrainian neighbours in the affairs of the Church has already become a serious threat to stability in very diverse regions of the world, and our interaction in promoting the ideals of goodness, justice and peace has an enormous importance at the present stage’, the minister noted.

Mr. Lavrov enumerated the major areas of work in which close cooperation with the Church is developing: ‘We have a joint working group of the Ministry of Foreign Affairs and the Moscow Patriarchate; its members meet on a regular basis to exchange their assessment of various situations in particular regions of the world in which there are Orthodox believers, in which there are Christians. Discussed too are problems of the Orthodox in Ukraine, parishioners of the Ukrainian Orthodox Church of the Moscow Patriarchate, and problems of Christians, not only Orthodox, in the Middle East.

‘In a number of other regions in the world, our interaction helps meet the lawful interests and needs of an enormous number of our compatriots and those who confess Orthodox values’, the minister added.