Patriarch Kirill meets with US Ambassador to Russia

Source: DECR
Natalya Mihailova | 30 October 2015
On October 30, 2015, His Holiness Patriarch Kirill of Moscow and All Russia met with H. E. John F. Tefft, United States ambassador to Russia, at the patriarchal and synodal residence in the St. Daniel Monastery in Moscow. 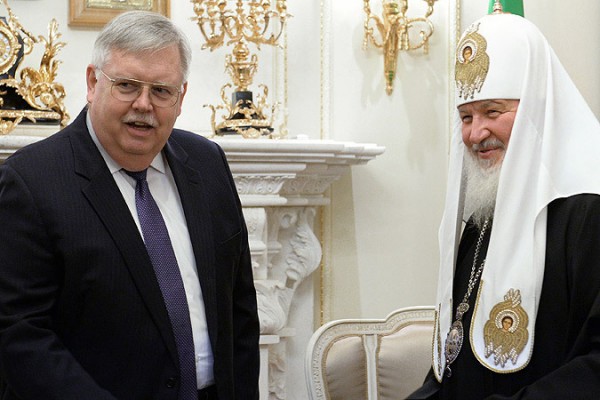 Participating in the meeting from the Department for External Church Relations (DECR) of the Moscow Patriarchate was Archimandrite Philaret (Bulekov), a DECR vice-chairman. There were also Ms. Lynne Tracy, deputy chief of the US diplomatic mission in Moscow, and Mr. Christopher Grossman, secretary to the ambassador.

Welcoming his guest, Patriarch Kirill mentioned their previous meeting which took place in November 2014. ‘I give a great importance to the opportunity to meet with you and to exchange opinions. I believe it is especially important that we should maintain closer contacts at a time when difficulties are arising in relations between our two countries. It is my deep conviction that difficulties and problems come and go, but how quickly they go depends on people. The Church always stands for having as little problems in international relations as possible’, he said.

His Holiness reminded his guests that despite the difficulties existing today, the history of relations between Russia and the United States was marked through centuries by many positive moments.

‘Our meeting takes place on the day when the Minister of Foreign Affairs of the Russian Federation and the State Secretary of the United States and many other high-ranking persons from various countries meet in Vienna to discuss problems concerning the Middle East. It is certainly an important problem in international relations’. Mr. Tefft said.

He also informed Patriarch Kirill that since their previous meeting he visited a number of Russian monasteries and churches. ‘I am very grateful for the hospitality accorded me by representatives of the clergy. It is of a profound personal importance to me’, he said.

In the course of the meeting, the patriarch and the ambassador discussed grievous crisis processes taking place in the world today. Special concern was expressed over the armed conflict in the Middle East and the situation of Christians and other religious minorities in the region.