Source: Serbian Orthodox Church
Natalya Mihailova | 16 November 2014
His Holiness Patriarch Kirill of Moscow and All Russia, who has undertaken a three-day visit to the Serbian Church, received the title of Doctor honoris causa of the Belgrade University in the Solemn hall of the Rectorate on Friday, 14 November 2014. The honorary degree was awarded at the proposal of the Faculty of Orthodox Theology. 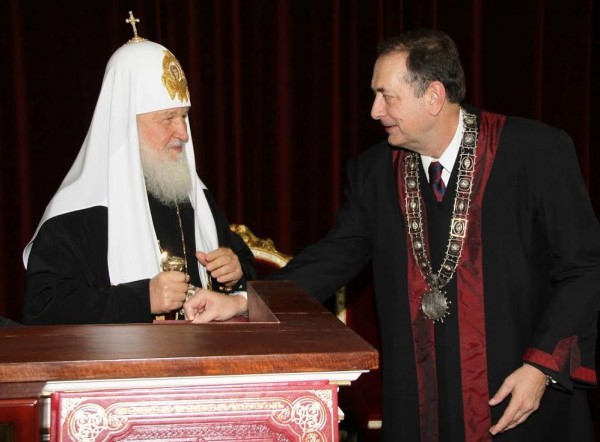 Rector of the Belgrade University Professor Dr. Vladimir Bumbusarevic handed over the honorary degree. Dean of the Faculty of Orthodox Theology Professor Dr. Predrag Puzovic exposed the life and work of Patriarch Kirill, whereas His Grace Bishop Dr. Irinej Bulovic, ordinary Professor of theology, presented reasons why the Faculty of Orthodox Theology had decided to launch a proposal for Patriarch Kirill to receive the honorary degree. He said that the Patriarch became doctor honoris causa due to his overall scientific work and contribution to  improvement of theological science, especially in advocating for the establishment of close links between theology as a science and the mission of the Church in society.

Having received the Diploma of Honorary Doctor of the Belgrade University, His Holiness Patriarch Kirill of Moscow and All Russia addressed the audience, whom he reminded of the centuries-old ties of the two close Orthodox peoples, Serbian and Russian. He indicated what these two peoples had given each other throughout history. He reminded how Belgrade and Serbia were bombed in 1999, since he had watched that with his own eyes while he happened to be in Serbia then. He also spoke about the mission of the Church, pointing out that contemporary Europe had renounced its own Christian tradition.

At the end of the ceremony the All-Russian Patriarch presented an icon of Christ the Saviour to the Belgrade University, one luxurious monograph on Russian Patriarchs and many of his books.

Patriarch Kirill arrived at the Solemn hall of the Rectorate along with his host Patriarch Irinej and many bishops of the Russian and Serbian Churches. In the Solemn hall there were present many bishops and priests of the Serbian Orthodox Church, representatives of the Roman Catholic Church, many academicians, senators of the Belgrade University, faculty deans, vice-deans, professors and students, cultural and political dignitaries.

Most viewed articles
Fleeing To The Desert, A Little Bit160
The Worst Year Ever – Or Was It?137
El Mundo Includes Russian Orthodox Cathedral in the Six Most Beautiful Churches of Madrid117
Resentment, Guilt, Forgiveness: What Should Everyone Know About Them?108
Patriarch Kirill Speaks on the Power of Epiphany Holy Water104
South Carolina Passes Pro-Life Bill That Takes Aim at Roe V. Wade60
Orthodox Service “Mercy” to Open a Rehabilitation Center for Homeless49
Orthodox organization invites children to strengthen faith through a short film competition28
The Transfiguration of Our Lord and Savior Jesus Christ1
Sunday of the Samaritan Woman1
Most popular authors
Pravmir.com team270
Archpriest Michael Gillis160
Archpriest Geoffrey Korz137
Konstantin Olkhovoy108
Madison Ferguson60
Ștefana Totorcea28
Fr. Gabriel Bilas1