To counter the threat of divisions, it is necessary to begin a pan-Orthodox discussion of the accumulated problems.
Pravmir.com team | 27 February 2020 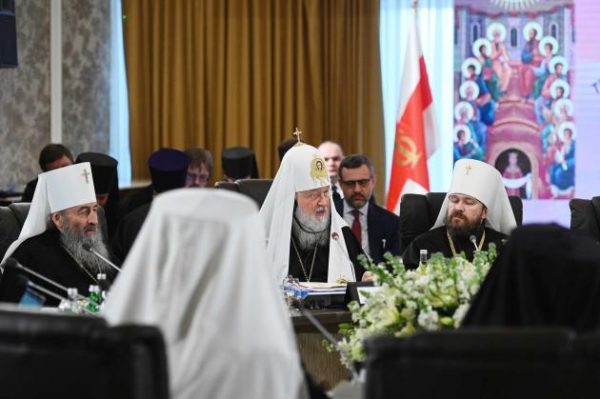 The loss of a common understanding of the structure of the Church and the nature of primacy in it are the main causes of the modern crisis in Orthodoxy. This opinion was expressed by His Holiness Kirill, Patriarch of Moscow and All Russia, at a meeting of primates and delegations of the six Local Orthodox Churches, held in the capital of Jordan, Amman, on February 26, 2020, Patriarchia.ru reports.

As His Holiness Kirill noted, today the Orthodox Church faces the threat of divisions, the likes of which have not existed for nearly a thousand years. To counter this threat, it is necessary to begin a pan-Orthodox discussion of the accumulated problems.

The most acute challenges for Orthodoxy, according to Patriarch Kirill, are the following:

“Firstly, it is the problem of understanding the primacy in the Church; attempts to substantiate claims to universal supremacy with the help of specially created theological argumentation; the lack of a system of collective control over the actions of the leading cathedra, the denial of the need for consensus in decision-making on a pan-Orthodox scale. These issues should be universally conceived.

Secondly, it is a threat to the institution of autocephaly in the Church; the lack of a universally recognized mechanism for the provision of autocephaly indisputable for everyone; attempts to introduce an inequality between the “senior” and “younger” autocephalous Churches.

Third, there are existing attempts to challenge the canonical boundaries of the autocephalous Churches, to revise and revoke once adopted documents of historical importance defining these boundaries.

Fourth, the claims of the first among equal Primate in the family of Local Orthodox Churches on the right to accept appeals from any Church and the threat of using these appeals as a tool for interfering in the internal life of other Local Churches also, I am deeply convinced, require reflection and discussion.

Fifth, the occurrence of an abnormal situation when the leading hierarch, contrary to the basic principles of canon law, acts as a judge in the case where he is one of the parties, representing himself as the last resort in the consideration of this case.

And the sixth is the problem of creating the so-called “stauropegion” in the territories of other Local Churches without their consent or against their will.”

Other participants in the meeting spoke about the importance of a pan-Orthodox discussion of the situation, as well as solving problems in accordance with the holy canons.

As a result, His Holiness Patriarch Kirill expressed the wish that the meeting in Amman be the first in a series of such meetings, and turned to His Beatitude Patriarch Theophilos of Jerusalem with a request to initiate a continuation of the dialogue.