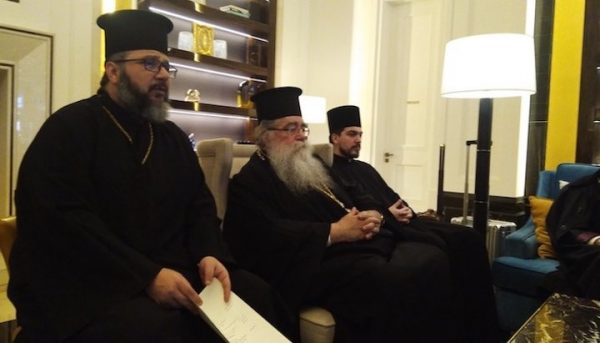 Representatives of the Serbian Orthodox Church at the Fairmont Hotel. Photo: UOJ

A meeting of Christian Orthodox Church leaders and representatives to discuss the situation around the new church of Ukraine (OCU) will be held in Amman on Wednesday, reports Interfax.

Only four Local Churches, out of the total 15, will be represented by their heads: Patriarch Theophilos of Jerusalem, whose idea it was to hold the meeting; Patriarch Kirill of Moscow; Patriarch Irinej of Serbia; and Patriarch Rostislav of the Czech lands and Slovakia.

The Polish and Romanian churches will delegate their archbishops. Patriarch Bartholomew of Constantinople declined to attend, claiming he had the sole power to call such meetings. Others followed suit, including the Greek Churches of Hellas, Alexandria, and Albania, and the Antioch Patriarchate of Georgia, Bulgarian, and Cyprus Churches.

The meeting will be held behind closed doors. The patriarch of Jerusalem blessed only the Jordanian state broadcaster to cover the event. On Tuesday, two groups of Russian journalists were asked to leave the grounds of the Fairmont Hotel, which will be providing both the accommodation for the attendees and will also be used as venue on February 26. Attempts by Russian reporters to film from the rooftop of a nearby building were foiled by police.

The first part of meeting, expected to begin after a morning prayer and last for three hours, will be followed by a three-hour audience with King Abdullah II, after which a second, evening part will begin, where the participants are to formulate a joint position on the Ukrainian issue.

In December 2018, the Patriarchate of Constantinople, backed by the former government of Ukraine, set up a new church in the country. The Russian Orthodox Church responded by cutting off communion with the patriarchate. For many months, the non-canonical church was recognized only by Constantinople. However, last fall, recognition came from the head and part of the episcopate of the Greek Church, followed by that from the Patriarch of Alexandria who ministers to Orthodox communities in Africa.