Patriarch Kirill on four years as Patriarch: a lot has been done, a lot remains to do 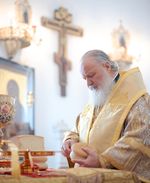 Patriarch Kirill on 4 years as Patriarch

Moscow, February 1, Interfax – Patriarch Kirill of Moscow and All Russia served a liturgy in the Cathedral of Christ the Savior on the fourth anniversary of his enthronement as patriarch.

“These four years were full of so many events that would be enough for forty years and even more,” the Patriarch said after the liturgy.

A lot was done by the entire church during his tenure as Patriarch.

“We are not summing up the results and we are not making any joyful reports on what we have done. We realize with humility that a lot has not been done yet. But we thank the Lord for these four years, for the joys and sorrows, but above all for the mercy that our Lord, the head of our Church, has given all of us,” Patriarch Kirill said.

Patriarch Kirill thanked archbishops for the accord among them, “for understanding the common goals and the importance of working on achieving these goals,” and also thanked the clergy, monks, and all people. The Patriarch said he is confident that “God will have mercy on all countries of the historical Rus” that are under the care of the Moscow Patriarchate and will keep the Church “united, spiritually strong, and unconquerable by the enemy” in response for labor and righteousness.

During his tenure as Patriarch, Patriarch Kirill conducted large-scale church reforms, including the change of the diocese management by forming over 30 metropolias and almost 90 new dioceses and ordaining 88 bishops. Considerable changes took place in the administrative system of the church, including the revival of the inter-council presence and the foundation of the church graduate and doctoral programs. Qualitative changes also took place in the social service of the Church.

In the four years of his tenure as Patriarch, he visited more than 100 dioceses, some of which he visited more than once, and also visited Azerbaijan, Armenia, Belarus, Ukraine, Moldova, Kazakhstan, Egypt, Lebanon, Syria, Turkey, Bulgaria, Poland, Japan, Israel, Palestine, Jordan, and Cyprus.