Source: DECR
Natalya Mihailova | 24 January 2017
On January 23, 2017, His Holiness Patriarch Kirill of Moscow and All Russia opened a plenary session of the Russian Orthodox Church’s Inter-Council Presence, at the Church Councils Hall of the Church of Christ the Saviour in Moscow. 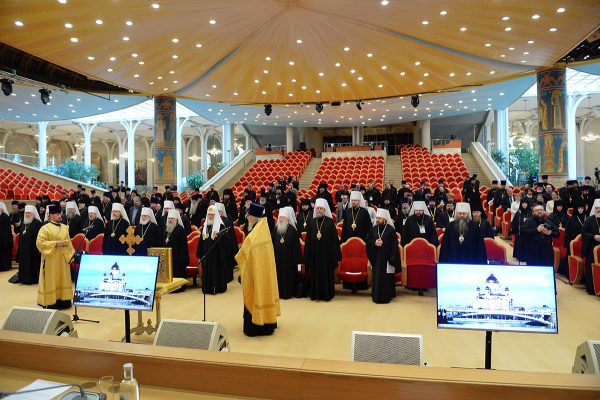 The plenary session began with the singing of prayer led by Archpriest Vladimir Divakov, patriarchal secretary for Moscow.

His Holiness Patriarch Kirill addressed himself to the members of the Inter-Council Presence with introductory remarks and announced the following agenda:

Before the discussion on these issues, Patriarch Kirill and the session members considered a number of proposals for themes to be taken up by the Inter-Council Presence.

The Inter-Council Presence is a an advisory body of the Moscow Patriarchate working in periods between Local and Bishops’ Councils with the task to prepare decisions concerning major matters of internal life and external work of the Russian Orthodox Church.

The agenda of the Inter-Council Presence is determined by a Local or a Bishops’ Council, the Holy Synod, and Patriarch of Moscow and All Russia.