Patriarch Kirill: Pan-Orthodox Council is called to show the unity Of Orthodoxy to the world

Source: DECR
Natalya Mihailova | 04 February 2015
On February 2, 2015, addressing the Bishops’ Conference, His Holiness Patriarch Kirill of Moscow and All Russia, spoke about the process of preparations for a Pan-Orthodox Council to take place in 2016 in Constantinople. 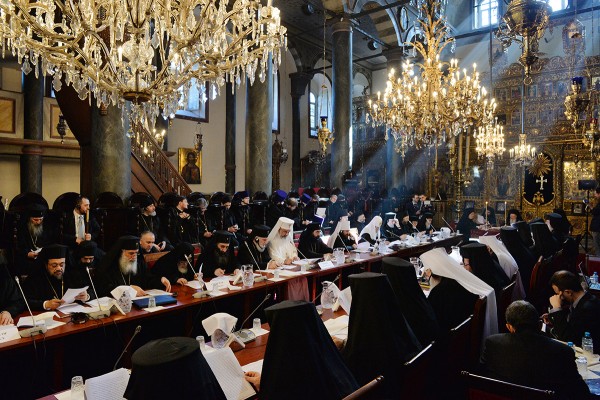 He reminded the bishops of the stance expressed by the Russian Orthodox Church at the 2013 Bishops’ Council that all the Pan-Orthodox Council should make all its decisions ‘exclusively by consensus of all the Local Churches, not by a majority of votes’ (Par. 60, Decisions).

His Holiness informed the Bishops’ Conference about important decisions made last March by the meeting of the Primates of Local Orthodox Churches in Istanbul. He noted that ‘after long and not always easy discussions, the Moscow Patriarchate’s position on matters of principle for us was supported by many Local Churches’. As a result, the final document of the meeting asserted the principle of consensus in decision-making during both the Pan-Orthodox Council and the preparatory stages for it.

His Holiness Kirill stated with regret that the work of the Special Inter-Orthodox Commission established for preparations for the Pan-Orthodox Council progressed not quickly enough as there was only the first meeting of the commission in September 30-October 3, 2014, in Chambesy, in which a delegation of the Moscow Patriarchate, led by Metropolitan Hilarion of Volokolamsk, head of the Department for External Church Relations, participated. The second meeting is planned for February 2015.

Patriarch Kirill expressed concern over the fact that no invitation to take part in the meeting came from Patriarchate of Constantinople to representatives of the Orthodox Church of the Czech Lands and Slovakia, which violates the principle of consensus in the process of preparations for the Pan-Orthodox Council.

‘Keeping in mind that the coming Council is called to show to the world the unity of Orthodoxy, I believe this problem must be resolved as soon as possible’, His Holiness stressed.