Patriarch Kirill prays for peace near the USA frontier

Source: Interfax-religion
Natalya Mihailova | 09 September 2016
Ratmanov Island, September 8, Interfax - Patriarch Kirill of Moscow and All Russia conducted a prayer service for peace and protecting environment at the USA frontier - on the Russian Ratmanov Island in the middle of the Bering Straight. 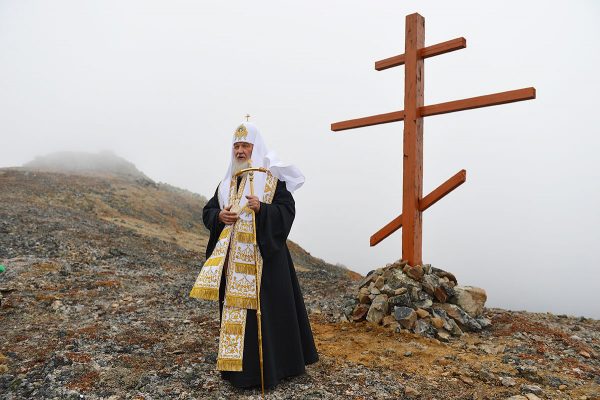 Only 3750 meters separates this easternmost point of Russia from Krusenstern Island (Little Diomede), which is the USA territory. According to the frontier guards, only about 50 people have ever visited the island.

The patriarch came to Ratmanov Island on a MI-8 helicopter from Lavrentia frontier village located in the continental part of Chukotka, and then reached the worship cross at the island bank going by the land-rover through a swampy tundra.

“Let’s pray for peace in the whole world. Let’s pray for good friendly relations between Russia and the United States, we are neighbors. It is difficult to imagine, but we are very close neighbors, we live in four kilometers from each other,” the patriarch said to the clerics, frontier guards and journalists, who accompanied him.

The primate prayed for “preserving God’s creation so that human sin should not destroy God-granted beauty of this world.”

According to him, in such places as Ratmanov Island “filled with great sense and meaning,” you cannot help thinking about many things.

“Certainly, you think about our people, about our country. But your thought go further, you think about the world, about people living on our planet. It is so strange to realize that on this Earth, so beautiful, so diverse, so magnificent, granted by God – people often live bad,” he said.

Speaking about it, he reminded that “human race continues wars, clashes, madness of terror attacks, people destroy nature only because they strive to increase the level of their consumption, they exhaust resources and pollute the Earth.”