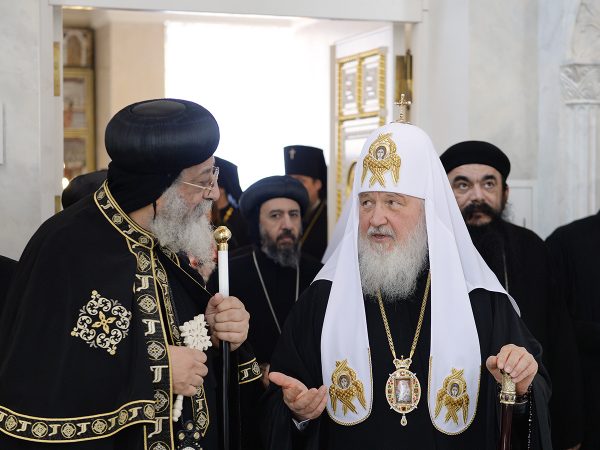 He made the proposal on Tuesday as he received Tawadros II in the official patriarchal residence in St Daniel’s monastery in Moscow.

“An idea appeared upon the outcome of a trip to Egypt by a group of our monks to issue a request to you for authorizing delivery to Moscow of the relics the founding fathers of our shared monastic tradition,” Kirill I said. “This would ignite huge spiritual enthusiasm in people and strengthen our bonds further. Nothing else unites people as tightly as common saints.

He invited Coptic Christians to visit the shrines of the Russian Orthodox Church. “We are looking forward to the arrival of your delegation and we’ll show them our monasteries and our monastic life,” he said. “On our part, two periods of time are the most accepable from June 16 through to June 22 and from August 20 through to August 26.”

The two Patriarchs also discussed a range of pressing bilateral issues, including the struggle with terrorism. According to Kirill I, the root-cause of the problem is found in the renunciation of faith by contemporary Western society something that the preachers of Islamic fundamentalism make a ploy of.

“The theme that comes up here in the first place is the obtrusive standard of godless secularism,” he said. “They are expelling God from humans’ lives and godlessness is overpowering the world.”

“Those who recruit people seek to wake up religious ferver in them and peddle a distorted image of Christianity to them,” Kirill I said. “You can hear quite frequently the talk about a Crusade against Islam. It puts an equation mark between Christianity and the godless secular world.”

He said the perpetrators of terrorist acts most typically have a low level of education, and stressed the importance of permanent dialogue between Chrisians and Moslems for discussing and resolving all the knotty issues.

The two Patriarchs discussed the problems of religious education. Kirill I said he had given a recommendation to educational institutions reporting to the Russian Orthodox Church to enlarge the lists of topics for thesis and dissertations linked to Christianity in the Middle East.

The Coptic Church was founded by St. Mark the Evangelist. It is one of the branches of Eastern Christianity.

Coptic Orthodoxy is a monophysite Church, which means its dogma suggests Jesus Christ’s nature is simultaneously divine and human. The Church has about 400 communities at present and most of them are found in Egypt.