Source: DECR
Natalya Mihailova | 29 May 2014
On May 27, 2014, His Holiness Patriarch Kirill of Moscow and All Russia met with Metropolitan Anthony of Mexico, Central America, Venezuela and the Caribbean Island, a hierarch of the Patriarchate of Antioch. 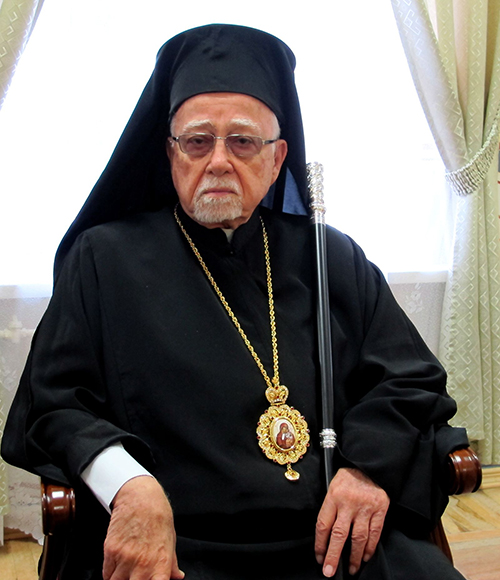 Welcoming the guest, Patriarch Kirill said, “You are a reliable friend of the Russian Orthodox Church. We give a high value to your independent stand in advocating the principles of Orthodox ecclesiology, which support the dignity of each Local Orthodox Church. At the same time, you are open to dialogue and cooperation with other Christian communities”.

As His Holiness noted, last year Metropolitan Anthony headed the delegation of the Church of Antioch who came for the celebrations marking the 1025th anniversary of the Baptism of Rus’. “We had an opportunity to talk about many things including inter-Orthodox relations. Much we spoke about was realized by God’s grace during the Istanbul meeting of Primates of Local Orthodox Churches”, he said, pointing to the special importance of the preparations for an Pan-Orthodox Council in which all Local Orthodox Churches are to participate.

Patriarch Kirill assured his guest that the Russian Orthodox Church invariably supports the Church of Antioch as it continues its service in the present tragic situation in Syria and Lebanon.

“We are moved by your compassion on the situation in Ukraine”, His Holiness continued, “You rightly compare the situation in that country with that of the Middle East and Kosovo. Unfortunately the Church cannot prevent developments initiated from outside. But the duty of the Church is to proclaim the truth and intercede for people, especially those who become victims of a cynical geopolitical game. The power of the Church’s attitude lies in the truth. If we lose the ability for speak the truth, if we relate our attitude to that of the powerful of this world and begin speaking in generalities, nobody will need either our words or our service”.

Speaking in response, Metropolitan Anthony said, “Today the Russian Orthodox Church, the Russian people, the Russian State, are saving Christians in the Middle East from being killed. I am here to thank you for all that you are doing. Thank you for saving our people, for everything”.

They also discussed inter-Orthodox relations and problems involved in the pastoral care of Russian-speaking Orthodox faithful living in Mexico and the situation in the Middle East.

Most viewed articles
Metropolitan Hilarion of Eastern America and New York to Be Buried in Jordanville on May 22171
Patriarch Kirill: The Peoples of Russia and Ukraine Have No Interest in the Conflict163
Communion restored between the Serbian Orthodox Church and the Macedonian Orthodox Church – Ohrid Archbishopric119
Metropolitan Hilarion of Eastern America and New York Reposes in the Lord117
What Do We Celebrate at Mid-Pentecost?101
Metropolitan Onuphry: One Needs to Search for the Truth in Spiritual Life, not Easy Ways85
Celebrating 100 Years with Paschal Joy64
Patriarch of Serbia to Concelebrate with Archbishop Stephen of Ohrid41
Family Life and Spiritual Warfare28
China’s Internet Clampdown Is Step Closer to ‘Cancelling Christianity’10
Most popular authors
Pravmir.com team696
Ioannis Foundoulis101
Priest Luke A. Veronis64
Archpriest Michael Gillis28
Donna Birrell10