Patriarch Kirill: Remember the Dead for the Sake of Life

Recently, the head of the Russian Orthodox Church Patriarch Kirill visited the Russian city of Smolensk. His trip was short but full of events – and, as His Holiness believes, it will probably be a turning point in Russian-Polish relations. 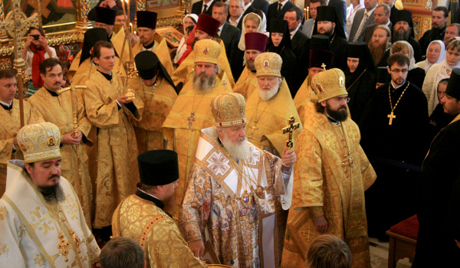 The main event of the Patriarch’s trip to Smolensk was that he sanctified a new church at a place near Smolensk called Katyn. This church was built as a monument to commemorate Polish and Soviet citizens who were executed by Stalin’s regime in Katyn in the 1930s and 1940s. Now, Russians and Poles will be able to pray together for the souls of the Katyn martyrs.

Several Orthodox church hierarchs from Poland took part in this sanctification together with the Russian Patriarch.

In an interview with the Voice of Russia, an Orthodox priest from Poland Alexy Andriyuk, who is also an army officer, said:

“It is very important for us that Poles who were executed by Stalin’s regime are now commemorated in Russia. For me, the new church at the place of the old tragedy is a symbol of unity between the Russian and the Polish people. It is also symbolical that the Russian Patriarch sanctified this church on the eve of his visit to Poland.”

Patriarch Kirill also took part in the ceremony of opening a plaque at the Smolensk University, which commemorates Tatyana Schipkova, a teacher of this university who was persecuted for her faith by the atheistic Soviet regime in the 1970s and 1980s.

“Let this plaque be a sign of memory for all those who, in spite of any persecutions, firmly stood for their faith – sometimes, at the expense of their lives,” the Partiarch said.

“Let us always remember believers who, like Tatyana Schipkova, in the times of the atheistic regime, tried to tell young people more about religion,” His Holiness said. “At present, Russia’s authorities are introducing lessons of religion in schools, and I believe that this is a very good sign. In our time, when the world is ruled by money and high technologies, faith is the only way to keep one’s high morals.”

“Never forget those who were persecuted or who died for faith!”, the Patriarch concluded.